I’m writing about food again. Perhaps it’s true that this Whole 30 challenge is taking over my brain, but what’s more – it’s pushing away the fact that I am in the second half of the TWW now…I’ll have some sort of answer to this cycle by the weekend, I would imagine. I am not feeling positive, so those feelings are being replaced by…the Paleo diet.

I am relatively new to the Paleo diet, and I’m very new to the Whole 30 challenge, so that’s why I’m still talking about it. I want to share a few of my observations, but I promise this won’t be my new blog topic. It seems like a lot of you out there have tried certain aspects of Paleo, like going gluten-free, or dairy-free, or even grain-free, and I also know some of you have sensitive stomachs. This is also me, so in documenting going Paleo for the first time, perhaps a few of you will be inspired!

Going back to the sensitive stomach thing – I have always had the weakest stomach. If I’m stressed, nervous, excited, worried, too hungry, too full, or plain-old sick, it always affects my stomach. Every time. And therefore it shouldn’t have been a big surprise to me, in college, to be diagnosed with IBS. It also wasn’t a huge deal in my mind when I learned I can’t eat an apple on an empty stomach, I can’t eat onions (especially raw), certain tomato sauces caused problems too. I couldn’t have too much dairy, such as a glass of milk and a piece of ice cream cake at the same time (I give that example because that was just BAD). I can’t have blue cheese – devastating consequences (A – you remember that time, in Florence, Italy, running through the streets trying to find a bathroom…of course you do!). Etc, etc, etc. You get the point. All of these limits on my diet were around for a very long time, many years, before my autoimmune issues showed up. The hives, that are only worse with certain foods at certain times of day. The thyroid, which, over time, has proven itself to be a hot mess, with a sky-rocketing TSH level, after I eat carbs and sweets.

For me, Paleo seems like a logical option. I believe it is. But I know thinking about it kind of overwhelms people, as it did me. It still does, once in a while. But if you have any of my stomach problems, it might just be the best thing you’ve ever done. If you aren’t ready to go cold-turkey, then take out one food group at a time. If you are ready to go the whole way, but you’re not sure how long you can do it for (that’s me), do the Whole 30 challenge! It’s only 30 days! That’s what I keep reminding myself…

The biggest obstacle holding me back, before I started the challenge, was that I was afraid I wouldn’t be eating anything but eggs, grilled chicken and salad. I’d be bored and craving my gluten-free bread. But it’s just not the case! I have only done 1 day of this challenge, plus breakfast this morning, and every meal so far has been tasty and filling. Here’s the proof:

This was yesterday’s breakfast. The eggs had red pepper and spinach in them. I also am showing my tea because I have a question for you all – this is Tazo’s passion tea. On this 30 day challenge, you can’t have any sweeteners. So I had that tea plain…and it was sour and gross. Any teas out there that you think are sweet enough that they might not have to have sugar? I’ll take recommendations. 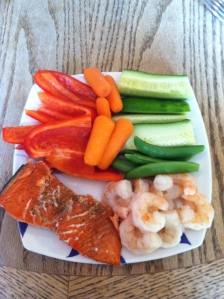 This was lunch. I just discovered snap peas – they are amazing! Normally, you can’t have peas on the Paleo diet, which is fine by me because they are gross. But with the pod, you can have them, and the pod is sweet and crunchy. We cooked up some salmon and I thawed some shrimp, and this was totally filling.

This was dinner last night – beef kabobs on the grill, sweet potato “fries”, and a salad, complete with homemade creamy Italian dressing. Delish! In addition to those three meals, I did have a few snacks. An apple with almond butter and a little ground turkey lettuce wrap, with tiny lettuce leaves from our garden, as well as a banana, and watermelon and frozen grapes for dessert. I may have gone a little overboard on fruit yesterday, but..oh well.

Finally, this was this morning’s breakfast:

This was an omelet FAIL. I still suck at cooking. I think I put too much inside it, and it wouldn’t even fold over. Anyway, it’s got ground turkey, red peppers, a few little tomato chunks, and avocado, and it was also delicious. And filling. After one day, I have already noticed a dramatic decrease in bloating, and I have more energy and am full for many more hours, without a sugar crash.

As you can tell, I’m loving this so far. But I have to give credit where it is due, because I’ve previously browsed plenty of Paleo websites before without much inspiration. These two women have the best blogs with the best recipes. It doesn’t hurt that they are both very funny and great writers to boot.

Mel from theclothesmakethegirl has her own cookbook out, Well Fed. I got it in the mail; it is my new bible. The salad dressing and the seasonings for the meats have come from there, so far. I want to try every recipe in that book, and let’s remember – cooking is not something I do. Well, did.

Michelle from Nom Nom Paleo has the other best blog out there, in my opinion. Unfortunately, I don’t have an iPad, but if I did, I’d be getting her recipe app. I love the recipe ideas she gives, as well as the step-by-step picture instructions.

I feel like I’m trying to sell something, which is annoying, I’m sure. I guess I’m just super excited about eating healthy, as long as the food is tasty and filling. And it is. If you think I’m crazy, just pick one recipe from either of these women, try it tonight, and tell me it’s not delicious!

It doesn’t have to be all or nothing – it can be just one meal a day. But if you think you might want to try it for 30 days, I have two pieces of advice that I have already learned:

1) Make extra. Cook a LOT more than you think you’d want for one meal, because having leftovers is KEY to less cooking and less stress. Those beef tips we had last night? There was enough leftover for lunch today for my husband and I. The ground turkey I threw in my omelet will also cover multiple dinners this week. I cut up enough veggies yesterday to make it through most of the week. Can’t think of what to have for breakfast or lunch? Just have leftovers.

2) Sunday prep day. I didn’t have much to do yesterday, so I took a few hours out of my day (which, hopefully as I get better at cooking, decreases in time) and did as much prep for this week’s meals as I could. Like I said, I cut up a ton of veggies to be used in meals and also in snacks. I cooked up a ton of ground turkey, and my husband grilled chicken thighs. I made 10 hard-boiled eggs. I steamed multiple vegetables and put them in the fridge to be used later this week in dinners, such as green beans, broccoli, and eggplant. I cut up a watermelon, sliced tomatoes, etc. I couldn’t do everything yesterday, such as make tonight’s spaghetti squash “noodles”, but it definitely took away hours of cooking time. And since it was the middle of the afternoon, I wasn’t dying of hunger, I took my time, and it wasn’t stressful in the slightest. My issue now is that my fridge is filled to the brim, and I’ve run out of storage containers.

Well, if you’ve made it this far, you might be intrigued! I don’t know if I’ll still feel this pumped in 29 days, but here’s hoping. I highly recommend just trying a Paleo dinner from one of those blogs, or jumping in head-first into the Whole 30 challenge, starting worldwide by its creators on August 1st.

So far, this seems totally doable.