You know, there aren’t many things that send me flying right off the handle without any bit of self control of my anger. I get irritated, yes, but I don’t usually want to go strangle someone unless a few buttons are pushed. Homophobia is one, parents of students who make ridiculous requests is another, and the current “pushed button” – when my dog doesn’t eat.

This is Sadie, our first dog. She’s 5 years old and my perfect little creature. I found her myself on Petfinder and fell in love. She was dumped in a ditch when she was a few months old and picked up by a vet, thank god. I treated her like a baby from day one (my bad), carrying her and doing lots of snuggling. To this day she is clearly “my dog” as she follows me room to room, lays in front of the shower when I’m in it, and snuggles up like nobody’s business. This dog (and my other charmer, Riley) mean everything to me. Imagining something bad happening to them sends my brain into a horrible place (stupid pregnancy hormones). I have always put their needs first, I think about them like they are my children, and I do whatever I can to keep them safe. I’m what you could consider a crazy dog owner.

This is why, when Sadie doesn’t eat, I want to do backflips in my kitchen and end with a fist through the wall. Drives. Me. Crazy.

Eating has always been an issue – she will go months at a time eating like a champ (aka, a normal dog), and months where I could kill. They are patterns, and I’ve seen it before. To her credit, she does have a bit of an acid problem. After throwing up first thing before eating in the morning, and hearing her stomach grumble across the room, and watching her eat dust off the floor until she throws up, I decided she has an acid issue. This I don’t blame her for. I got permission from the vet to give her half a Pepcid tablet before meals, and the vomiting has stopped. However. When her tummy is fine, and she has eaten peanut butter off my fingers, pieces of wet food (that I put on top of dry food), pieces of shredded cheese, has gone and sucked the wet food juice off every individual piece of kibble – and then refuses to eat the actual meal (the dry food) I could scream.

I do the feedings, as my husband does literally everything else and isn’t home at dinner time. Here is how a normal meal goes (breakfast and dinner): I start with peanut butter. If she doesn’t want it I force it in her mouth. I disguise the Pepcid in it. I share the peanut butter spoon with poor Riley, who would eat every morsel in my house if she could. I take the dogs out to pee. When we come in, I get their food together. Because Sadie was acting hungry after she used to eat, the vet said to put no salt canned green beans in her dish, so the fiber would fill her up. So, the dogs get their dry food with a few green beans on top. Riley eats from a specific type of bowl that slows her down. I don’t think she even chews her food. Sadie, a few weeks ago, started refusing this concoction of dry food and green beans, so I did what I did last time this happened at least a year ago – I added wet food. I know it’s bad for her but worth my sanity. Not a lot, either. And before I put it in her bowl, I give her a little off the spoon to make sure she is going to eat it. I stir it up. The dry food now has a coating of wet food juice. The past few days, this has now been rejected. If she even wants the wet food chunks (sometimes she doesn’t), she picks them out of her bowl, licks off some kibble, and that’s it. Hence the picture. In the past I’ve had to literally force her mouth open and make her crunch a single kibble, because sometimes after she does, she realizes she does want to eat and then eats.

This has been going on for a few days – the flat out refusal. This morning, we were back to work after vacation and I had already spent 25 minutes on this process. She didn’t eat. We had to go to work. When I got home today, she immediately went outside and tried to eat grass so she could throw up. The poor dog was starving, as I knew she would be. Though I had my own tiring day, I bent over in the backyard, forced the peanut butter and Pepcid, and helped her not throw up due to all that acid. I let it sit, she felt better, I went to feed them, she ate the wet food only, and now she’s grounded, as you can see.

At 23 weeks pregnant with twins, I can’t keep doing this to this extent. It’s insane. So I quit tonight and let her lay there next to her bowl. Currently, my husband just got home and has more patience than I do, so he’s forcing the kibble into her mouth. She may spit it out 10 times, but eventually she may crunch.

So now I’m a total ball of stress. Her stomach is fine, I made sure of it. She ate the wet food. We should not have to keep going and adding things to her bowl to make her eat. We beg, we yell, it’s bad. Sometimes she only eats if I stand next to her.

My husband gets frustrated sometimes too and just says forget it, and that doesn’t work for me. She cannot skip more than one meal in a row. I feel too bad, and I don’t want to deal with the aftermath when she is sickly and shaking at the next meal. So. I need help. There is seemingly nothing wrong with her health except for the acid bit, which I’ve taken care of.

Spending an hour twice a day begging a dog to eat won’t work when there are infants around. I will call the vet tomorrow – maybe there’s something wrong with her teeth? But otherwise, I’m at a total loss and I dread the next doggy meal. It’s not like she refuses all food, it is usually just the dry food. And giving her just wet food is garbage and will rot her teeth, though I’m getting to that point. Oh, we’ve tried different brands of dry food too. She ate two meals of it and has refused again.

Anyone have any advice? I love her to pieces and I get angry because I’m concerned. It seems like she’s just being stubborn. 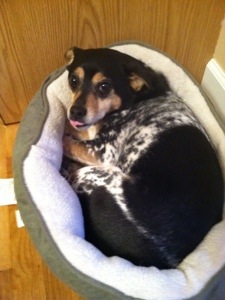 Snuggle Sadie in a finer moment. 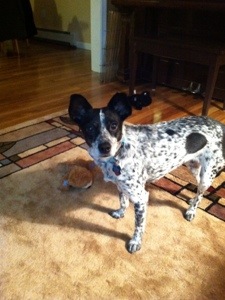 I neglect Riley at mealtimes. Thank god I don’t have two doggy refusals.

The update: my husband got her to crunch two kibble and then she quit. The bowl has been removed and I will stay up until midnight if necessary getting her to eat something tonight. My husband has just offered to take the stress from me tonight and promises that she will eat something before bed. I’ll pick this up again tomorrow morning.