This “cold” the babies have is finishing up its 6th day. Last Sunday it started as sneezing, fussiness, one afternoon of a mild fever and then a runny nose (and projectile vomiting..damn Tylenol) and as the week went on, I thought we were in the clear. But then a cough took over, becoming a very wet cough and then last night it turned into all-out barking. They are both having coughing fits that wake them from their sleep, poor babies. I hate to see them sick.

The barking was my cue that it was time for a doctor visit. So instead of going to playgroup (a good move for sure), I schlepped the babies to the doctor.

Diagnosis – Bronchiolitis for B, double ear infection for C. Geez – no wonder they didn’t feel good!

I felt terrible I hadn’t gone to the doctor sooner, but the P.A. did say that if I had, the babies might not have shown these symptoms and it would’ve been written off as “just a cold”. Regardless…terrible!

And I’m a newbie with sick babies, this is the first time they’ve been ill. So it’s hard to see, and at the same time, they want extra love that is hard to give with two. And there’s snot EVERYWHERE in my house. Separating toys is a challenge, but I do wash all the plastic ones every night.

That’s all manageable, but it’s the coughing fits that are so sad. With B, his breathing was actually a little labored so he is using a nebulizer for the weekend. C just has her antibiotic.

A quick look online told me that bronchiolitis usually comes from something else – mainly RSV. As a former NICU parent of preemies, those three letters were something I was praying my children didn’t get. In preemies it can be extremely, extremely dangerous. I am so thankful that mine were born in July, not during the main season, or we would’ve been on lockdown. That said, all children under the age of 2 get RSV at some point, but it’s not severe and disguises itself as a cold. So the likelihood that my twins have RSV is quite high, leading to bronchiolitis for B and a double ear infection for C. I shudder at those letters…but I’m SO grateful that it’s happening now, when my babies are hefty and healthy, and not when they were so fragile. So thankful for that.

Fun fact – bronchiolitis has a correlation with asthma in children. Researchers aren’t exactly sure how this connection came to be, but many children who have bronchiolitis as a baby go on to have asthma later in life. This sucks, but wouldn’t really surprise me as my husband had asthma as a child and B is an EXACT mini version of my husband, including all of his (minor) health issues.

In other news, the babies were weighed today for the first time since their 6 month check up and I’m happy to report that B is only 22.5 pounds! This means he can still use the doorway jumper that has a weight limit of 25 pounds! The jumper is his absolute favorite thing…and I’m dreading when he outgrows it, way faster than I would have expected. So he’s still got 3 pounds to go, thank goodness.

And Lil C isn’t really so little either – she’s certainly more petite than B with tiny feet, hands, and stubby legs, but she’s 19.5 pounds, and for an 8 month old, I think that’s not too bad.

We survived the week, despite the illnesses and not being able to go to 3 baby events that would’ve kept me sane. Next week, I’m hoping we can at least attend one and get out of the house.

What we did do, though, is go to Costco, where the babies enjoyed sitting in a cart for the first time. Did I pack wipes? Yes. Did I leave them on my kitchen counter? Yes.

And then decided it was time to go home… 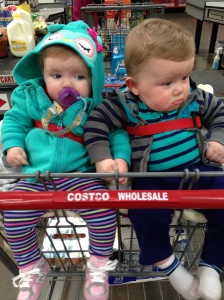 And then they promptly melted down in the car on the way home. No picture of that one.

Not much to go on this week, but here’s a few:

Just practicing being a man, rubbing the gut, while trying out his new baby leggings.

I just place her in things and she tolerates it. Thanks, C.

One thought on “Still Sick!”