The twins are making some progress, finally! We’re still not quite there, but they are on the cusp of some very exciting milestones – what looks like walking for B and crawling for C, and a much deeper understanding for both of them. I love reading all the other twin blog updates, so I’ll have my own shortly. Tonight though, it’s all about mealtime.

Right now, mealtimes are one of my least favorite parts of the day with the babies. C has figured out how to feed herself (yay!) but B is a NIGHTMARE, both because he’s restrained in straps that he hates and because he’s constantly starving and I can’t feed him fast enough. This is typical B during meals: 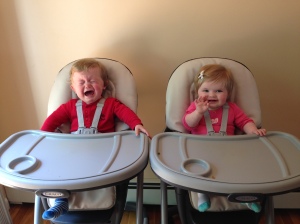 This is how it goes, three times a day:

B screams when I strap him in. If I can’t get his milk heated up fast enough (i.e. any amount of time period) he screams while that’s happening. I do try to heat it up beforehand but it doesn’t always happen. I give him the cup; I have to hold it for him. He drinks the 8 ounces in less than a minute, sometimes in about 30 seconds. He doesn’t stop to breathe and screams when I take it out of his mouth for a second to catch his breath. When the straw has sucked up the last drop, he screams. I one-hand grab his straw cup of water, to hold him over while I’m feeding C with my other hand. He takes a few sips and realizes it isn’t milk. He calms for about 30 seconds.

B starts screaming again, because he wants his solids. Sometimes I manage to give him some, but otherwise I give him a toy. He throws it, and proceeds to scream. Once C is done with her bottle that I have to hold, which takes her 5,000 years to drink, I put their solids on their tray. B will eat anything and everything, as long as it’s edible. And maybe even if it’s not. He doesn’t dislike any food, though he doesn’t show a preference for anything either. Today, and many days, I put peas, cut up string cheese, and black beans on their trays. C happily puts one piece in her mouth at a time and she’s gotten very good at this over the past week. I shove food in B’s screaming mouth. He immediately calms and hums to himself, happy as a little clam.

But then B swallows and I’m not quick enough, and he screams again. I put more pieces in his mouth, off of his tray. He plays with his food, but he shows as much interest in feeding himself the solids as he does his straw cup of milk – none. He screams in between bites, but laughs and giggles while actually eating. When he’s finally full, he calms for a few minutes.

Then, when he realizes he’s still strapped in his chair, he screams again, until I take him out. Sigh.

Who ever said “it gets easier” with twins? And why can’t my babies hold their own bottles/cups?

And I’m seriously hoping that this isn’t B’s true, extremely demanding personality. He was the EASIEST, calmest baby and now he is so challenging. I just hope this has something to do with the milestones he’s near to reaching and not a sign of the next 18 years of our lives.

*C has found a regular sippy cup with handles that she likes and she drinks water from it. She even tilts it back, so that’s great. Problem is, she won’t drink milk out of it, so meals are out of the question. Only water.

After the scream fest, snuggles with his sister: 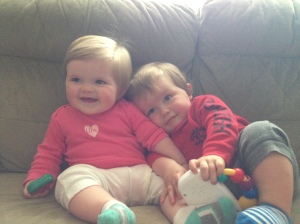 More on the good stuff soon!

12 thoughts on “A Typical Meal”