Somehow, since my last post, things have come together. Life is taking on somewhat of a schedule and we may be emerging from this 12 month sleep/behavior regression relatively unscathed. Like I was told, “it’s just a stage”.

1) We cleaned our house. It took an entire weekend, and it’s not TOTALLY done, but we did a top-to-bottom clean of the majority of the rooms, especially those that the nanny, J, would be in. And since we cleaned, we’ve maintained some organization by dividing them each night and taking on a chore list. I never thought a chore list would be something we’d have to resort to, but my husband likes it because he knows exactly what he needs to get done, so he just cranks it out and then heads for the couch. Myself – I tend to take a quick break after the babies go to bed, and then I get cracking on my chores. We’re still spending at least 2 hours a night cleaning/cooking/prepping food, but until we get in the groove of things, I don’t see how to make these chores happen faster. At least our house is clean(er).

2) B is climbing out of his Wonder Week 55 fog. Like C’s 4th month sleep/behavior regression, B’s lasted about 5 long weeks. As suddenly as it came on, he changed again. He isn’t as easily irritated. He’s eating (a few) more foods. He throws fewer fits in a days time – and when he does, it is easier to manage and he recovers quickly. And most importantly – he’s sleeping through the night again. He’s back to taking 2 naps (I’m glad we didn’t keep pushing for the one nap – it was all part of the regression and he’s not quite ready for 1 nap yet). He is re-sleep trained and if he wakes up and cries (which is now becoming rare) he will get himself back to sleep. Ahhhh. It was a long 5 weeks.

3) We made progress on the food. I had to just sort of make the decision – either the babies would eat what we eat and learn to like different kinds of foods, or they would eat extremely healthy, but only rotate between like 10 things. So we chose the first option – mostly for dinner. We have made friends again with the crock pot and use it every. single. day. (This is part of what takes so long for those nightly chores – making dinner!) When the babies eat dinner at 6:00, we eat with them. And now that we’re throwing all these new food combinations at them, I’m not expecting them to like or eat all of it – so I do have backup veggies and cheese and that sort of thing. But I’m at least getting them to try the dinner – and some they’ve loved, some they hate. It’s an interesting game for us as parents – figuring out what they hate. It’s not that I’ll never make it again, but I want to make sure they have something they like at least every other dinner. And so far, they really love anything with cheese or pasta. So whenever we have meat, if they won’t eat it by itself, I tuck some into a whole wheat wrap with cheddar cheese and make it a quesadilla. I’ve put ground turkey, ground beef, chicken, and pulled pork in there that way. For pasta – they absolutely gobbled up minestrone soup, whole wheat gnocchi…etc. And the soup was great because there were veggies and beans in there, and they didn’t even notice. They just dug in. Two meals they have hated were beef stew and shepherd’s pie. I assumed they would love shepherd’s pie, with the potatoes, cheese and veggies, but I’m coming to the conclusion that they do not like the flavor of beef. So the beef stock that was in both of those meals was a no go for them. It’s this daily challenge, but hopefully we’ll continue to expand their palates. I’m not giving them pasta more than a few times a week. We’ll just have to try new things.

4) Finally, and this is a big one, our nanny, J, started with us. After 13 months with these babies, I’m going back to work. I spent all last week setting up my classroom, and this week and next week we’re back for real. The first day was all adrenaline. The second day, I have to admit I was sad, but not devastatingly so. And that might be because J is awesome. She’s young, she has fresh ideas – she does a different sensory activity with them daily. She has found her groove quickly and the babies took to her right away. She’s even good with the dogs. She sends me pictures and doesn’t mind me asking questions. So I really can’t complain. The transition was as smooth as it could possibly be.

So progress is being made! 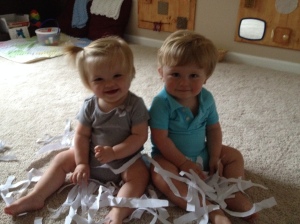