Okay, so this may be my last post for a while, though I hope not. I’m officially, really back to work on Tuesday, as it’s the first day of school. My nanny, J, is AMAZING and the transition has been perfect over the last two weeks. I miss the babies, but I feel like I’m leaving the twins in good hands. My biggest brag about her is that the kids do a different activity every day, and she has yet to repeat herself (though I told her she shouldn’t feel like she needs to come up with something different daily!) Two days ago it was birthday cards with baby fingerprints, and on other days she’s created sticky balls out of tape, used a muffin tin to play and sort plastic balls, cut paper into strips to play with, had a dance party, stuffed an empty wipes container with scarves to practice pulling them out – etc. She rocks. And she takes pictures and videos and checks in constantly. So I’m very lucky to have her and be out the door on time in the morning. In fact, when she arrives in the morning a chorus of cheers erupts from the high chairs. When I get home in the afternoon……meh? That would be the babies reaction. Meh. But it’s all good.

So food. As soon as we switched from purees to finger foods, and from finger foods to table foods, it’s all been a mystery to me. I have to admit I miss the puree days when I’d just throw a few cubes of this or that in a cup and mix them all up. There’s been many a pinterest and google search on what to feed these babies. I still feel strongly about the things I want them to eat and the things I don’t want them eating at this age, but yet, sometimes my plans don’t go like I thought they would. And by sometimes, I mean 90% of the time. I just wish that I could say, “Feed the twins ______ with guaranteed success”. I can say that, if I want them to exist on a diet of melon, banana, and peas. But otherwise – what they like to eat changes day to day. I hate the lack of consistency!

Breakfast – thankfully, I’ve got this meal down for the most part. They have their milk, then baby oatmeal mixed with leftover milk from their sippies or just water, and I usually add a cube of pureed apple or pear for flavor, though they will also eat it plain. They each eat about 3.5 tablespoons of oatmeal. Then they split half a banana. For the most part, it’s an easy, predictable meal – as long as I don’t show them the banana until it’s time – otherwise all bets are off.

Snack – their 3:30 pm snack WAS consistent, until today. I always gave them a cheese stick, either to share or they each ate one, followed by whatever veggies I had cooked and chopped. Every night I prepare two veggies for the next day to cover two meals and a snack. They’re some combo of peas, carrots, butternut squash and green beans. These are veggies they will always eat plain. I try to mix spinach, broccoli, and zucchini in with other foods, but I’d like them to eat these veggies plain as well. But then today, C flat out refused her cheese. She LOVES cheese. Today, she aggressively signed “all done” while saying one of her newer words, “no” over and over again (she’s also started saying “please”, so that helps make up for it!). And when she has made up her mind, there’s no tricking her. After veggies have been consumed, I sometimes give the babies fruit – whatever I have on hand that both babies like. B currently is into cantaloupe, bananas, and watermelon …so any other fruit like blueberries and grapes C gets in addition to whatever she’s eating. So C’s snack today was peas and watermelon.

Lunch and Dinner – these are the meals that drive me a little nuts. I’m trying to get them to eat table food – what we eat, they eat. They can’t just have peas and cheese forever. The problem is – it’s a total crapshoot on whether or not they will like it, so even though I have my backup veggies and fruit, I’m typically scrambling for more food. On the one hand, I DO agree with the idea that kids need to eat what the adults are eating – without Mom or Dad cooking 5 other meals to make all the kids happy. I agree. It’s just that..at this age, with my babies just starting to eat “real food”, they don’t know what they like. I don’t know what they like. We’re all learning. I know their tastes will change as they get older as well, so for now, I just feel like I need them to eat something, even if it’s not what I prepared. What they LIKE is pasta. Plain pasta, pasta with red sauce, pasta with white sauce…they like pasta. But I’m not giving that to them every night. They loved it in minestrone soup, they loved it with a white broccoli and chicken sauce. Up until TONIGHT, they also loved cheese quesadillas. I snuck some chicken into theirs tonight and B was hungry – he ate almost an entire quesadilla. Which was fine, because C was still on her “no cheese” kick and cried over the dinner I had figured she would eat. I had some backup sweet potato and a little leftover avocado..so she ate those instead, (and more watermelon) but I didn’t call that a MEAL exactly.

Sometimes we’ll make a dinner and just one baby will like it, or tolerate it even, and the other won’t touch it. Earlier this week we made black bean/sweet potato enchiladas (this website as a whole is totally amazing, I highly recommend it), but with a slightly spicy taco sauce on top – B wouldn’t touch it. C on the other hand ate pieces of sweet potato and black beans. Sometimes C will eat the food if it comes off of my plate, or if it comes off my fork, but she’ll refuse it as finger food. Sometimes B screams and points and I can’t for the life of me figure out what he wants, but he refuses to eat what’s on his tray. Maybe 3 out of 7 days a week, both babies will eat a meal and say together, “yum!”. And it usually involves pasta. It’s a daily struggle. I want them to eat well, get their nutrients, and I’m not ready to cave to foods that “all” toddlers will like – foods that I don’t consider the best for them. Once in a while is totally fine, but I feel like once I give it to them, it’s all they’ll want. I recently read a comment on someone’s blog from a registered dietician that children should order off of adult menus at restaurants – kids menus are usually just those typical “mac and cheese” “hot dog” type meals – when there’s no reason they can’t eat what the adults are eating. That made sense to me. I just wish it was a little easier getting my twins to like different sorts of meals with different textures and different spices. I know they’re still young – they’re only 13 months. But I’m not really digging this daily battle. At what age does picky eating become the toddler norm?

On top of all this, we are trying to prepare our dinners better ourselves. Going back to work means an even crazier day – so dinner needs to either be ready in the crock pot when we get home, or it’s very quick to cook. And that means we need to plan ahead. So I spend my late nights scrolling pinterest, looking for meals that are 1) easy, 2) healthy, and 3) tasty to children. And that’s a struggle.

So far for this coming week I’ve found a good tomato soup recipe (that for the babies, will likely involve pasta…sigh), yummy chicken burgers and tacos. Yeah – only one of those the babies will eat. So it’s not like the twins can just “eat what we eat”. They might be able to eat some of the ingredients in what we eat, if I disguise it as something else. I mean, on taco night, does it count as “eating what we eat” if they eat only cheese and avocado? Or if on chicken burger night they eat the chicken….mashed up into sweet potato? As of this moment, I’m still at a loss as to what to feed these babies in the upcoming week.

What I have found, however, are a few recipes for breakfasts/snacks/backup foods that would work for both myself and my husband rushing off to work and for the babies. Those include sweet potato banana bites, quinoa breakfast bars, and my biggest hope, the toddler smoothie. So in my spare time this weekend (HA!) I am going to make these things and hope for the best. Meanwhile, I’ll be up til midnight reading those food blogs that make it all seem so easy!

I can’t leave without a few pictures of course. Today, the babies went apple picking for the first time. I gave them each two apples to hold (after washing them of course), more as toys than anything. And sure enough, B treated them like balls and threw them around, playing fetch with himself. After a few minutes, I noticed that C dented her apple with her teeth and realized there was juice inside. So she started gnawing on it and by the time we left…she ate half an apple. By herself. One for the record books – today was the first day C (or B for that matter) ate something she held onto herself, that wasn’t off a spoon or cut into tiny pieces. I wondered when that day would come! 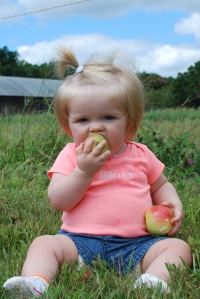 9 thoughts on “What DO toddlers eat?”