I realized tonight that I haven’t blogged in a while, and I thought it would be much more fun than correcting a giant stack of papers on a Friday night. I’m sure I won’t be disappointed!

A few weeks ago, I was basically in a tizzy, trying to manage work and home – the full-time teacher and the full-time mom. Even now, it’s still hectic, and I’d say 6 out of 7 nights a week, I go to bed around 11:15/11:30. There’s just so much to do – whether it’s baby-related or school-related. But I do feel I’m starting to adjust to the schedule. Just like a new parent becomes accustomed to sleeping in 2-3 hour shifts around the clock for months, a new-to-work parent becomes accustomed to sleeping from midnight to 6:00 and then heading off to work for a full day of fun. I do find it SO hard to wake up these mornings, and so I set three alarms. But after I finally get out of bed, my energy is raring to go (thank goodness I’m a morning person!) and I’m okay. There’s always a lot on my mind and a lot to do. Our nanny, J, arrives typically at 7:00 – so I want to have a few minutes with the babies before I hand them off to her. We have a nice system going – I shower first and then head upstairs where I take the babies out of their cribs and they play around their room for a few minutes. When my husband has showered and dressed, he comes upstairs too and then everyone goes down for breakfast and new diapers. By the time that’s all happened, it’s 7:00, J shows up to do breakfast and I start making myself presentable. Somehow, this is working for us.

On a positive note, I can’t speak for anyone else but now that I’ve basically managed to be a teacher as well as a mom, I do feel a little more empowered than I did before. I CAN be a pretty good teacher and a good parent at the same time. I may have to sacrifice sleep, TV shows (what’s TV?), and downtime for myself, but I know it’s temporary. In a few years the kids will be in elementary school and will play and talk in their room(s)..and sure I’ll have TV time, but I won’t have baby time.

At lunch today, my colleagues and I were having a conversation about the stages kids go through, and I realized that so far, there’s been no stage in my twins’ lives that I wish we could return to. I mean, I may think differently in the middle of a sleep regression or back when B was a tantruming, hitting nightmare, but when everyone’s back to “normal”, I really love the current stage we’re in. And I’m hoping I’ll love the next one too.

The babies are total toddlers. B is pretty much running. Walking is his main method of transportation now – he rarely crawls, and if he does it’s only for a few seconds. He’s an adventurous little guy – he learns through exploration. He wants to reach down and touch things, even if they make him cringe and make a face like he just licked a lemon (which happened today when he touched a dandelion) and he wants to test his limits. He’s discovered areas we don’t want him in and he cries and throws his legs around when we move him (such as from the bathroom, where he has discovered the toilet and toilet paper). But he also has suddenly taken interest in forks and spoons and is trying to feed himself. He has many words and signs he uses readily and picks up new little tricks quickly, like how to “high five” or make “fish lips”. He takes direction pretty well – though a little stubborn- , but really likes to be engaged with an activity. Today I had them on the front lawn and he started to wander from me so I asked him to bring me a leaf. Once he had done that I asked for another one, and another, and this kept him busy for 5-10 minutes, just gathering leaves in the yard to give to me. Such a strange concept – where once I had two babies, I now have two children who do what I ask them to do. They hear me, understand, and then follow directions. It’s really pretty crazy.

C learns by imitation and observation. She’s a watcher. The neatest thing for her is that it only takes once, maybe twice, for her to get the hang of something. She knows her animal sounds, for example, for the cow, sheep, dog, cat, horse, and duck. But the duck – I taught her that on a whim when I was trying to think of another animal sound to teach her. And after telling her twice in a row, she imitated it back to me and then remembered it the next day. And like B, I can give her a direction that’s multi-step and she can follow it. Tonight, B was heading towards the bath and I said to C, “Do you want to splash in the bath with B?” (Essss!) “Then go into the bathroom to take your bath” – and off she crawled. Or, as we played outside this afternoon, she wanted to go in the swing but B was in it, and I said, “I’m sorry but B is in the swing right now. It’s not your turn.” And out came the tears. She’s also found the word “No” – clear as day. “Do you want more green beans?” She does the “all done” sign with a “noooo” attached. It’s pretty cool. She also has changed her mind about straw cups all of a sudden and took right to them immediately. She was sucking on her finger covered in food and I thought, if she can suck on her finger she can suck on a straw, and that was that. So in the next few days I’ll be transitioning her off a sippy to a straw cup. And finally – she has just started to walk. Only about 7-8 steps so far, but she’s really perfectly able. She just doesn’t prefer to unless she has to at this point.

They are currently going through a food stage where they are up for trying ANYTHING. Thank goodness. Subsequently, I had to just bite the bullet a few weeks back and tell myself that if I wanted them to eat table foods, I had to give them…table foods. With whatever’s in it (for the most part). And because they’re open to trying things right now, we’ve had luck with all kinds of flavors, including soy/ginger, mildly spicy (like in tacos), etc. They’ve got no problem with flavors – textures would be the only issue. So if I’m not sure, if it’s the first time they’re eating a dinner, I might chop it fine and mix it with some quinoa, or puree it and smear it on a whole wheat wrap. But otherwise they eat what we eat – even chicken. So things are totally insane, hectic, and exhausting..but this is my life right now and I’m finding it really rewarding, even if the day to day makes me so sleepy. 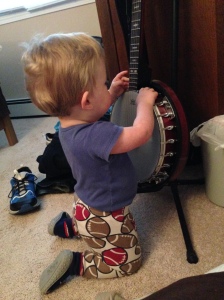 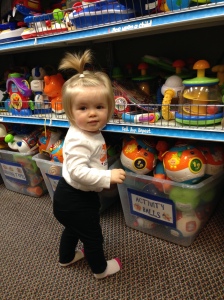 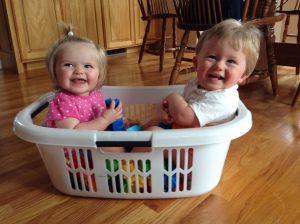 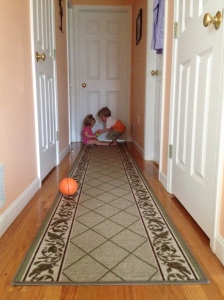 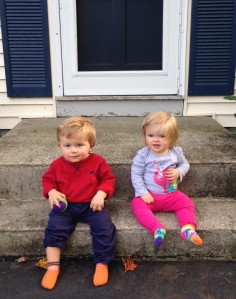 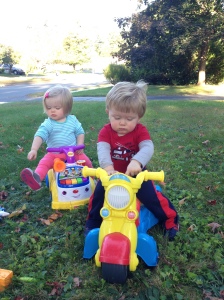