Going back at work after being a stay at home mom for the babies’ first year, one of the things I truly miss is the opportunity to do sensory, crafty activities. I’m all about being thrifty and using items that can be found in my own home (or no further than the dollar store) for the twins’ playtime opportunities. My nanny has picked up where I left off, but still, I miss being a part of it myself. My new goal is to try a new sensory activity every weekend with the twins. It doesn’t have to be complicated. This weekend I suppose we did two: We walked in the woods and explored the autumn leaves, trees, and rocks, and today, we played with playdough.

When I was a child, I loved playdough. I flattened it out into a pancake and stabbed it repeatedly with straws. I pushed it through the spaghetti maker and and balled it back up again. But I was also ten years old. As it turns out, playdough is fun at any age and is fabulous for getting those creative juices flowing.

Because the twins are only 15 months, I was a little concerned about them sneaking a bite of the squishy stuff, so I decided to make my own. Though not a single bite was tried, I’m so glad I made my own because I know exactly what went into it, I got to choose my own colors (it’s the little things), and it took me less than 5 minutes to make. Oh, and it was FREE. I used this blog post as the basis for my recipe.

Now, it should be known that most homemade playdough recipes call for cream of tartar. Apparently it helps make the playdough smooth. But we didn’t have that, and so I googled alternative recipes. I don’t know how much smoother the playdough could get, because mine was perfect. It was the exact soft, squishy consistency I was looking for – no cream of tartar needed. I used:

-3 tsp white vinegar (and no, the playdough didn’t come out smelling like vinegar!)

-(optional) food coloring – I made a lavender and a peach

Mix it all up in a pot, medium heat, stirring constantly. Take it off the heat when it hardens into a solid mass and let it cool. Then knead it for a minute or two and you’re good to go – ready for use! (I must say that for my second batch, I needed some extra flour on my plate as I kneaded the dough to get rid of the leftover stickies.) Here’s the finished product from my two batches.

Depending on the age of the child, you’d want some materials they could use for play. I knew my twins wouldn’t be able to make their dough into shapes or anything of that sort, so I bought $1 pick-up sticks at Target for poking. I also got out some measuring spoons. You could use anything – from pine cones and sticks to cookie cutters and plastic utensils. It’s a good thing I got the sticks, because they ended up being the real hit.

Now, every kid is different, and as I expected, nothing ever goes as planned. C spent the first five minutes either in a panic over this mushy mass in front of her (“Don’t make me touch it!!”), or completely bored. 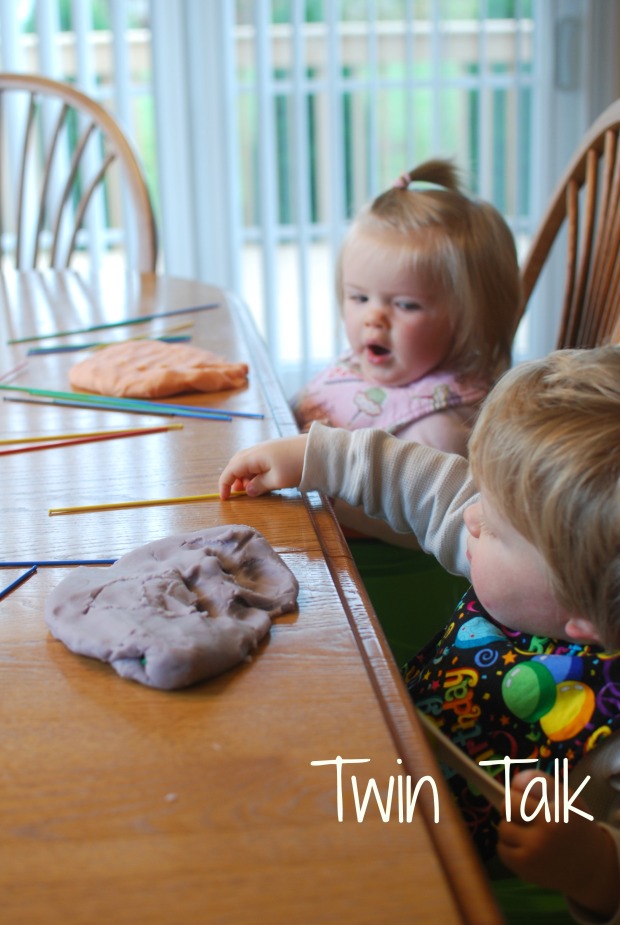 B took off with it, poking it and exploring, though neither of them ever really got their hands into it.

Then, after a few minutes, B got bored. He actually left the table. But C finally found some way to enjoy the dough sitting in front of her. She absolutely loved poking the dough with the sticks and then removing them. And then throwing them on the floor. And repeat. 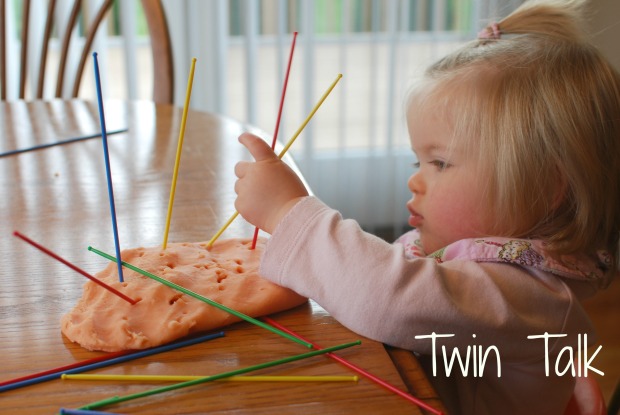 She sat at the table for no less than a half hour, just taking out sticks. It wasn’t exactly what I had in mind, but it was a successful activity. The best part about the playdough is that when stored in an air-tight container (or a ziplock bag), it’ll last for months. If you live in a humid area, you could put it in the fridge, but since we’re entering the beginning of a dry winter, I’m going to leave mine out and see what happens. Today was the first time we had ever used playdough, so I’m excited to see what they’ll do with it next time!

8 thoughts on “Homemade Playdough – NO Cream of Tartar”