One of my new loves is the tot tray. I recently tried using tot trays in our home for the first time, and I love so many things about them: the simplicity of the activities (which usually = cheap!), the ease of setup/cleanup, the educational aspects to them, and the (eventual) responsibility the twins will have in taking care of them. They fit with everything I love about toddler activities.

It’s my understanding that tot trays are usually sorted into categories that align with the Montessori model, including practical life, language arts, math, sensorial, and cultural studies. For example, you could Pinterest just “practical life tot trays” and come up with many cool ideas that help foster independence. However, for this set of tot trays, I went with a holiday theme: St. Patrick’s Day. 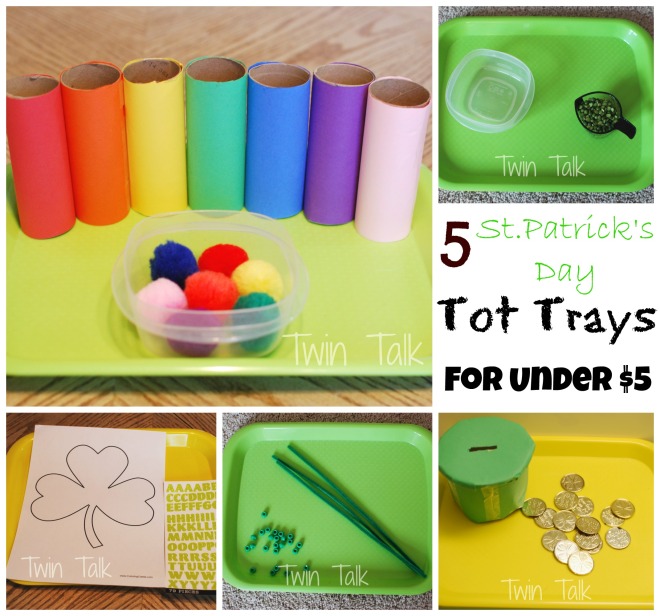 Over the course of a week or so, the twins did five tot tray activities that were simple, educational, and best of all – unbelievably cheap. Looking for a good, sturdy tray? Find them HERE.

Instead of writing five separate posts, I’m showing them all here and will keep the text on the short end as this post is picture-heavy. 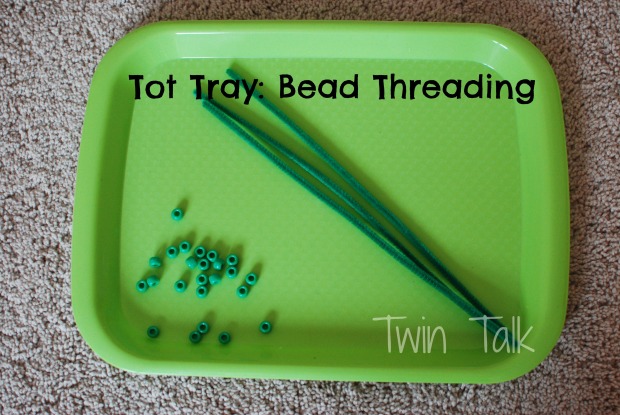 Money spent: $1.87. (Bought pony beads in assorted colors at for $13; each color averaged out to $.87) We had pipe cleaners already but you can find them HERE. 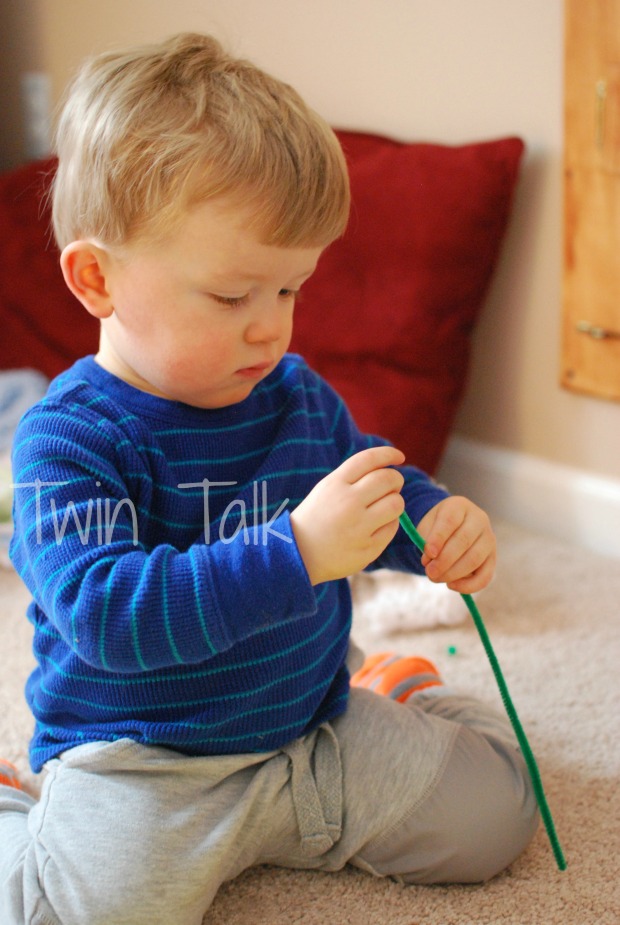 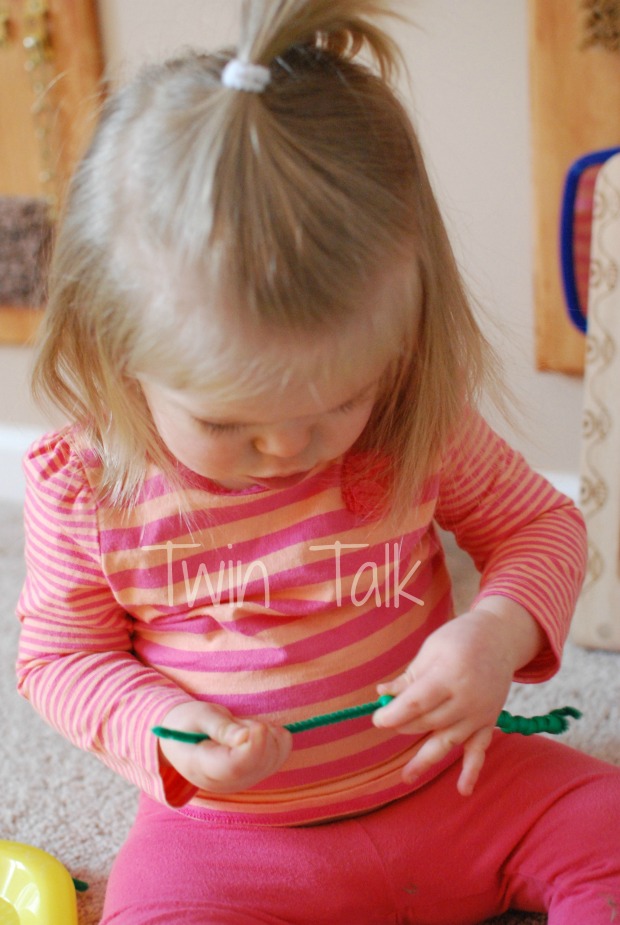 As hard as they tried, they could not thread the pipe cleaners with the beads. They are still a bit young at 19 months. However, they were great at unthreading the beads and did this for a while! As a disclaimer – this was their first time using beads and I was a little nervous to see how they would handle them, as the beads are quite small and could easily be swallowed. Neither of them currently puts much in their mouths right now, and B tested the waters by putting one to his mouth and looking at me. I immediately told him it was “yucky”, and asked him to help me put the bead on the pipe cleaner. He was distracted easily and didn’t try it again. C never tried it. That said, they are still a little young for these beads, and I’ll likely wait until they’re a bit older before using them again. 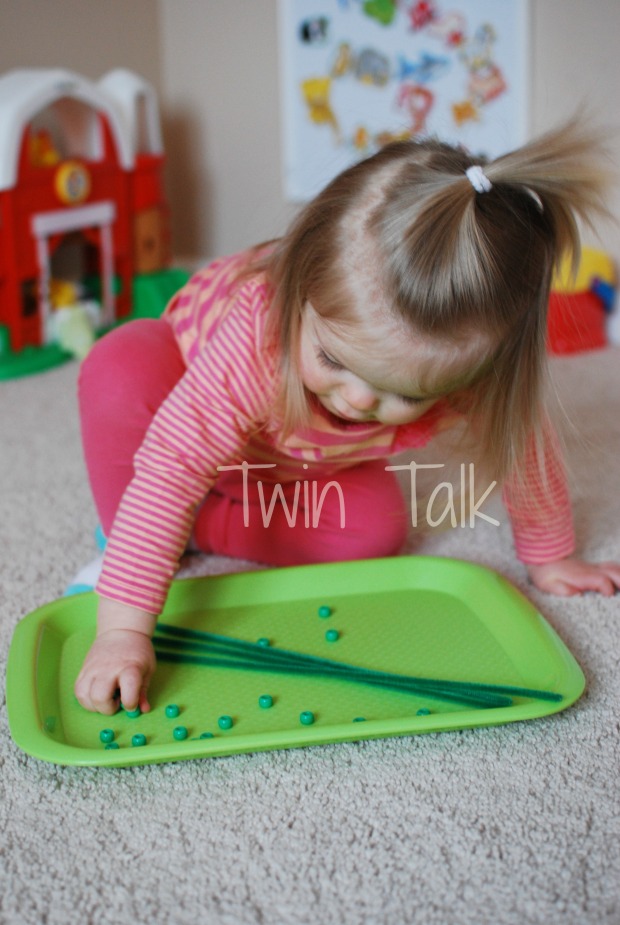 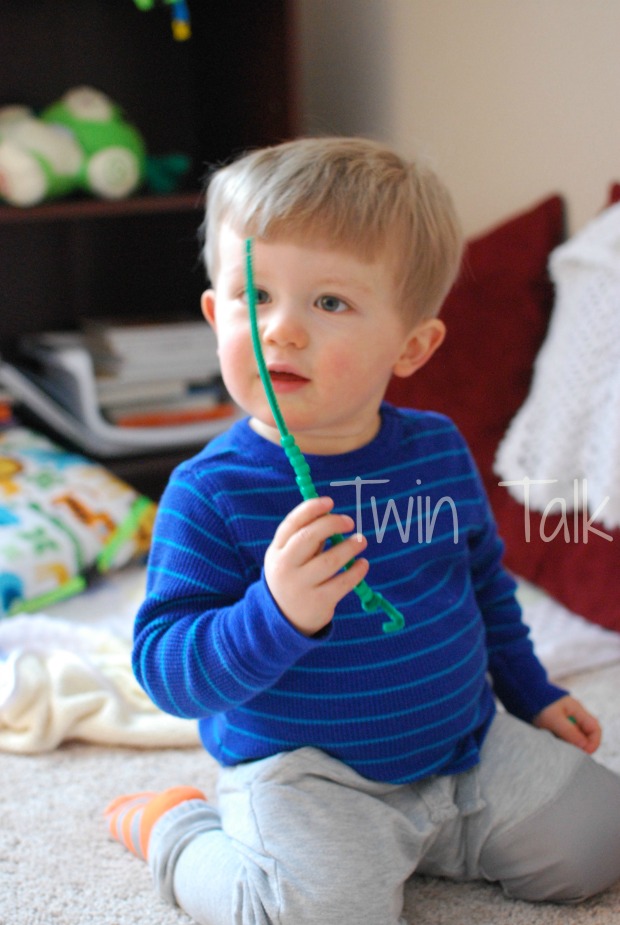 Overall, they enjoyed this tot tray. 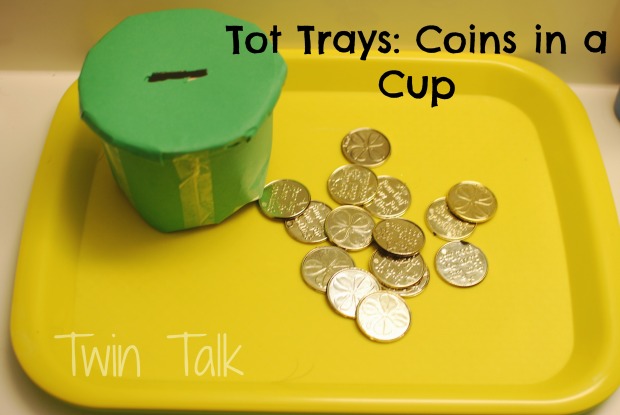 Money spent: $1. I used an old container from our repurposing old containers activity and cut a slit in the top, then wrapped it in green construction paper for St. Patrick’s Day. I bought the coins at the dollar store. 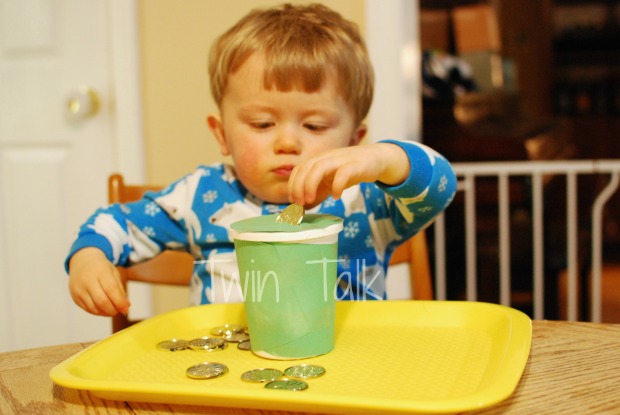 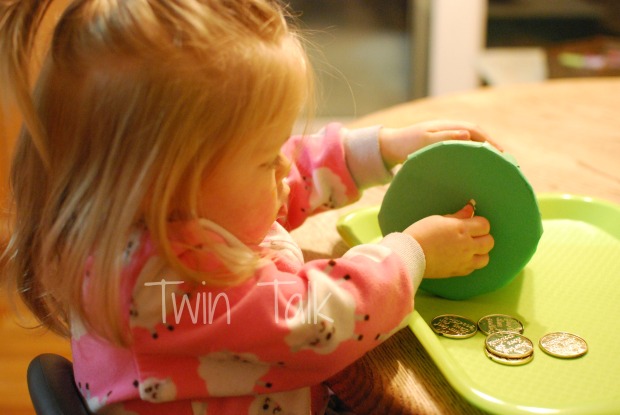 This tot tray was a huge hit and continues to be used on a daily basis. They loved being able to put the coins in the slot, then open the container, dump the coins out and start over. Lots of fun for this activity and it was such a simple concept. Big Y coins work just as well… 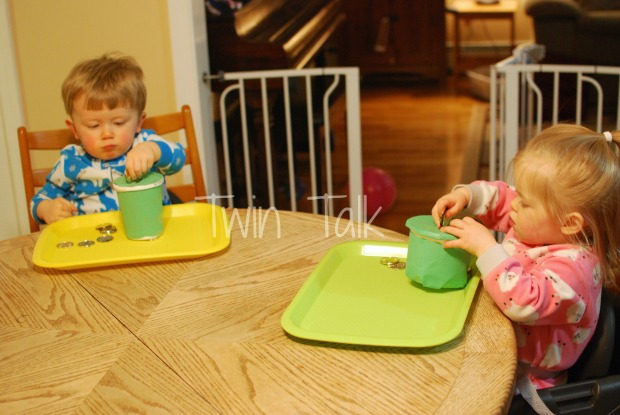 This tot tray was serious business! 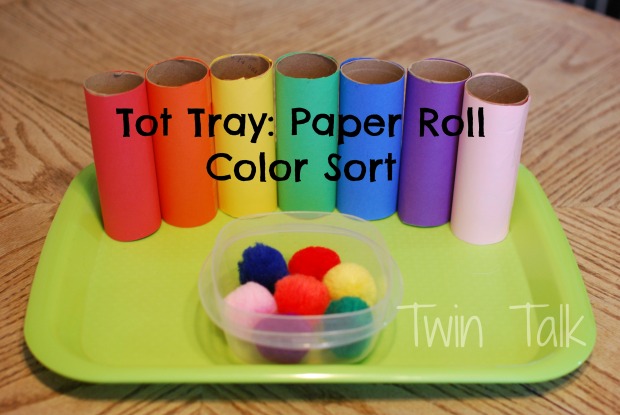 My personal favorite – I collected toilet paper rolls and paper towel rolls for a few weeks, then asked my students to help me wrap them up in construction paper during recess. I already had the pom poms from the one million things we have done with them! 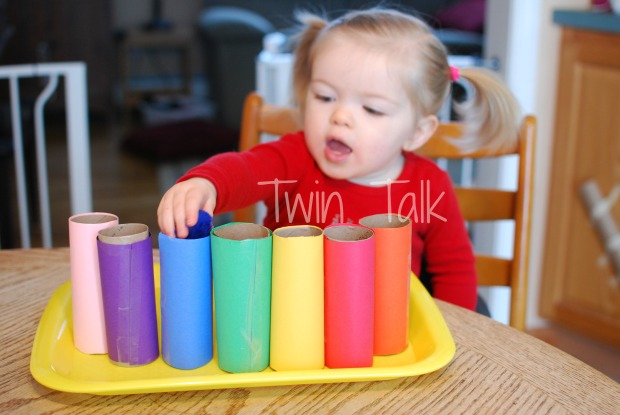 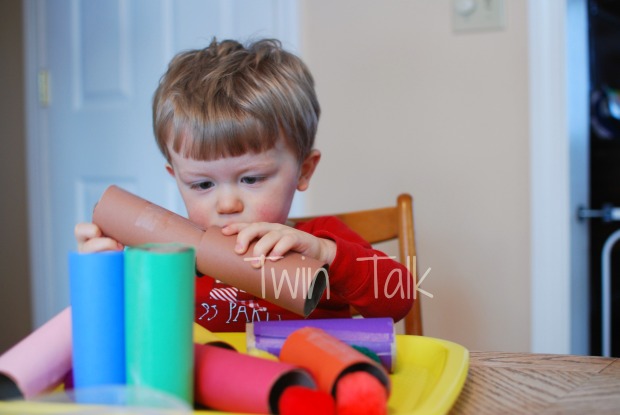 C took to this tot tray right away: sorting her pom poms, lifting up the rolls, and starting over. B (who is currently obsessed with colors), wanted his favorite colors in his possession immediately. His colors of the moment continue to be orange, but also now yellow and brown. I had brown construction paper but not brown pom poms, so I didn’t include them in this activity. However, a happy B is a happy Mommy, and he focused on trying to stack his brown rolls while C sorted. Still a success, and I plan on eventually cutting up the rolls to do a giant threading activity. 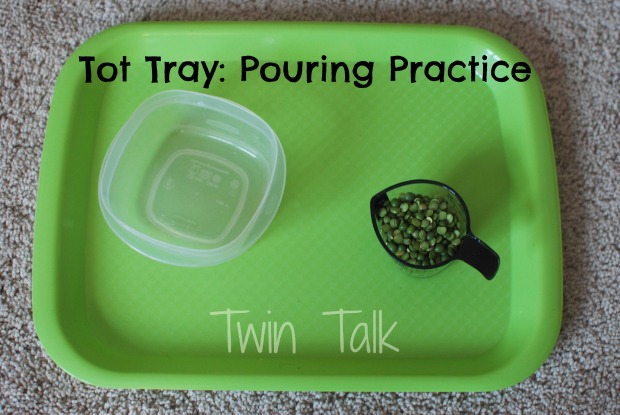 Money Spent: $1. The dried split peas came from Walmart. I already had the tiny measuring pitcher, though any cup would do!

I almost didn’t do this activity. I thought – there’s no way the twins can pour yet at 19 months. I had never shown them how, though they occasionally did it in the bathtub or with the sensory bins. But nothing so specific as to pour this into that container. C didn’t do much pouring, really. She was entranced by the texture of the peas, which we had never used before (and would make a great base to a sensory bin!) 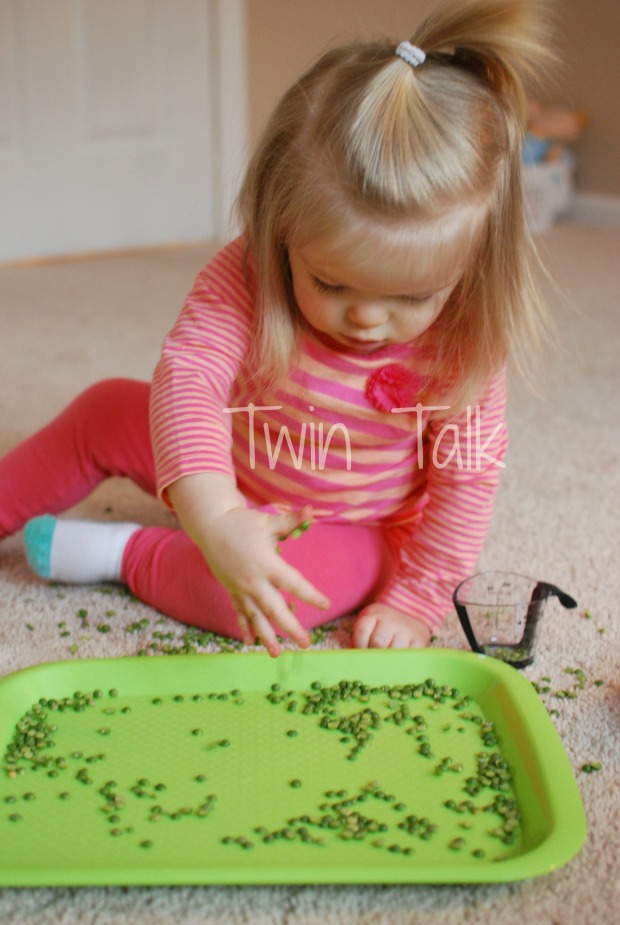 But B found his niche. Pouring things is what his little self is apparently made to do right now. He LOVED IT. 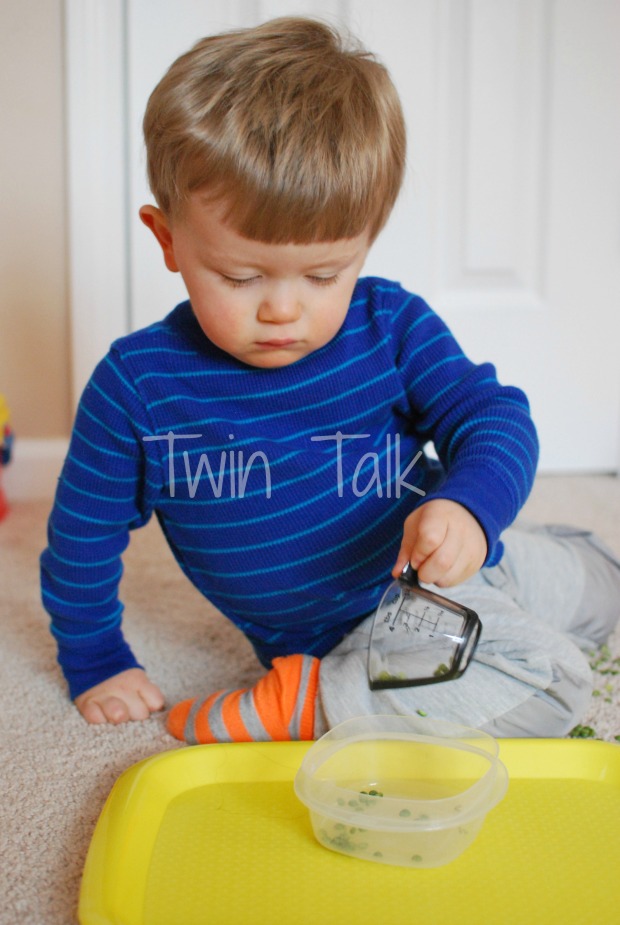 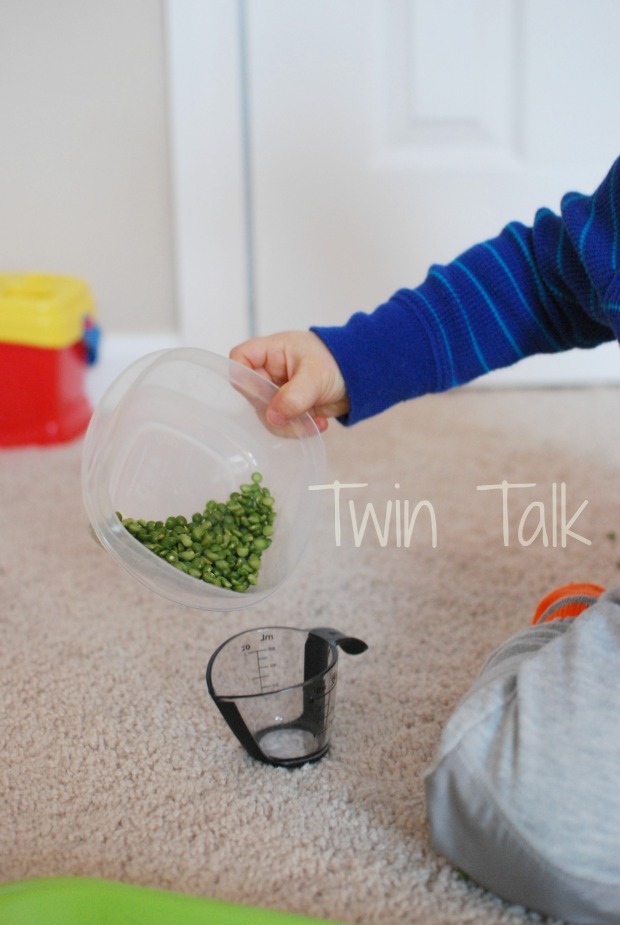 Not only did he love it, but he knew exactly what to do. As you can see from the pictures, he barely missed his target. He poured back and forth between the two containers for a good half hour. It really took me by surprise. I’m interested to see what else he can pour, and would love for him to eventually pour himself water to drink and you know, use this skill in a practical manner. A hugely successful activity for B. 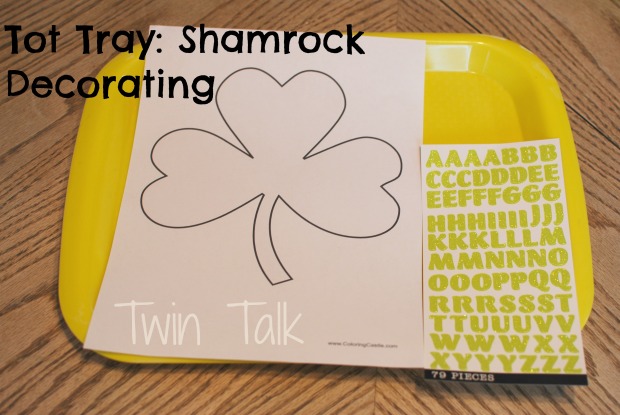 Money spent: $1 – for the stickers at Walmart. I printed the shamrock from coloring castle.com.

This last tot tray was C’s strength and she took to it for a very long time. First of all, she’s really into stickers and coloring right now. I couldn’t find St. Patrick’s Day stickers (which was my original plan), so I bought these green letters instead. I figured I’d go for the double whammy of alphabet review as well as practicing sticker skills. In order for the twins to get a sticker, they had to tell me which letter they wanted. B practiced reading his letters back to me. 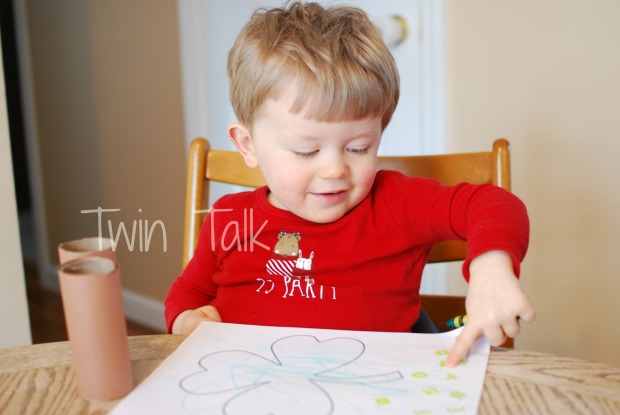 Then I gave them both a green crayon, and that’s when C’s fun really began. She colored and scribbled for a long time, until her picture was completely covered in green. 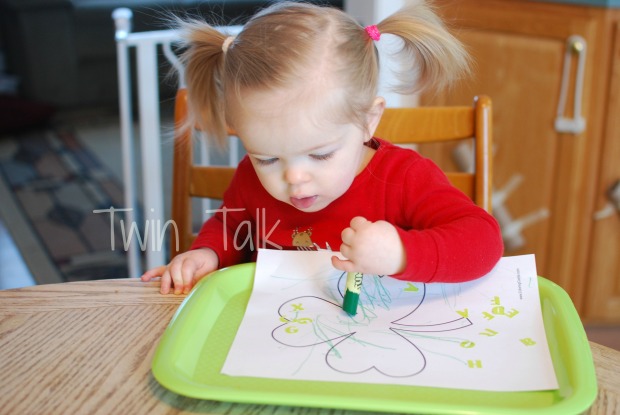 So obviously simple, and yet still so fun. A very successful activity for C.

I wanted my newest batch of tot trays to reflect St. Patrick’s day (and our focus on the color green) since it’s right around the corner. I suppose now I’ll be pondering what to do for the arrival of spring and Easter!

As a side note, I’ve recently created a Facebook page  where I share not only my own posts but those from other bloggers with similar interests as my own. Come check it out!