In the last week or so, we’ve been in full Easter egg mode. These eggs are such versatile toys – you can use them for so many activities and games for babies, toddlers, or preschoolers. We use them year round, though I’ve put together six activities in particular that are free (assuming you have the eggs already), simple in concept, and easy to set up. The twins did the six over the course of a weekend and loved them all. 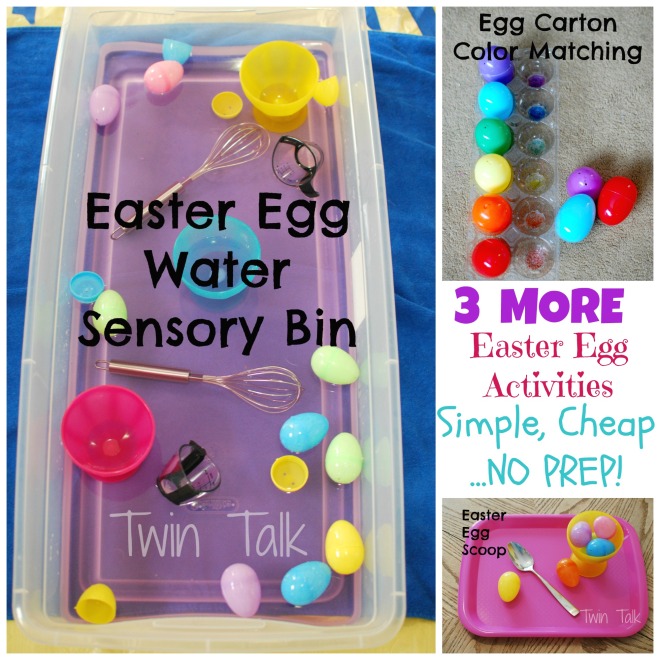 Part 1 of our six Easter egg activities can be found here, where we played an alphabet identification game, had an egg race, and practiced sorting by color. This time, the twins enjoyed some scooping practice, a water sensory bin, and sorted with the help of an old egg carton. 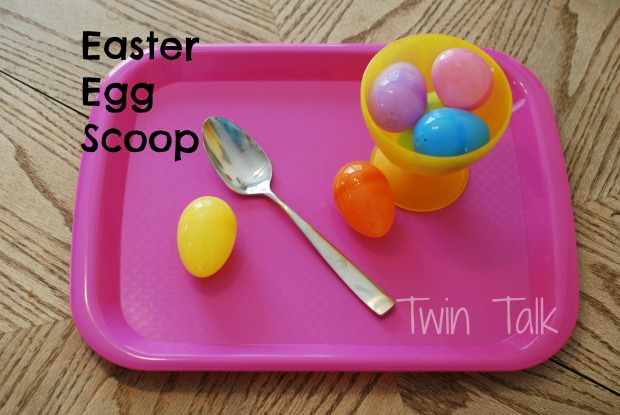 This was a “throw together last minute” activity that actually worked out well. The twins were antsy, and I quickly loaded up two trays (similar to THESE) with some eggs, a plastic ice cream dish (like THESE), and a tablespoon. The original goal was for them to practice scooping up the eggs with the spoon and dropping them in the cup. C had other plans, and enjoyed opening and shutting the eggs multiple times. B did try scooping though. 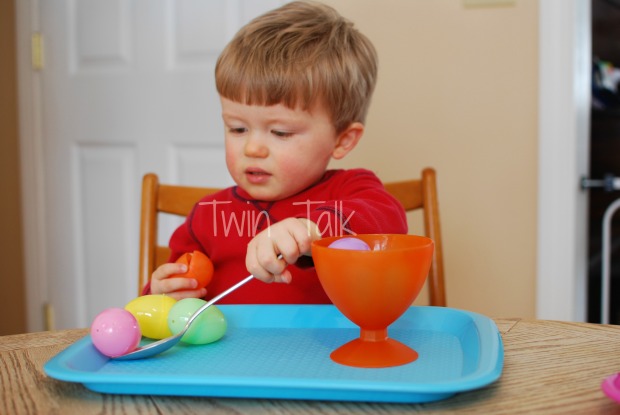 The lip of the tray helped him in scooping up an egg with the spoon, though in retrospect this activity would have been easier if the eggs were in a bowl of some kind, not a flat surface. Oh well – they got the challenging version. B is persistent when he wants to do something, and was successful in scooping and bringing them to the cup a few times. 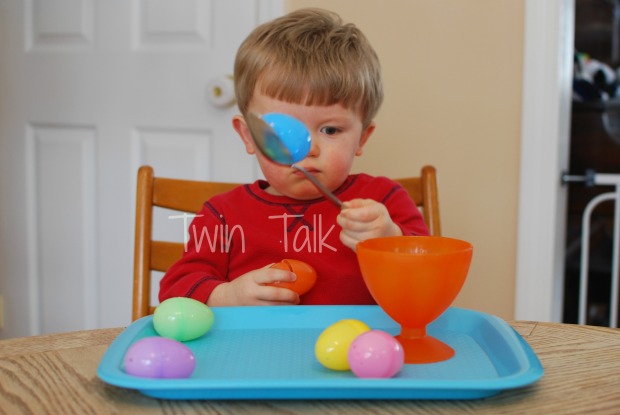 He had a good time, even though it was more challenging than I meant it to be. 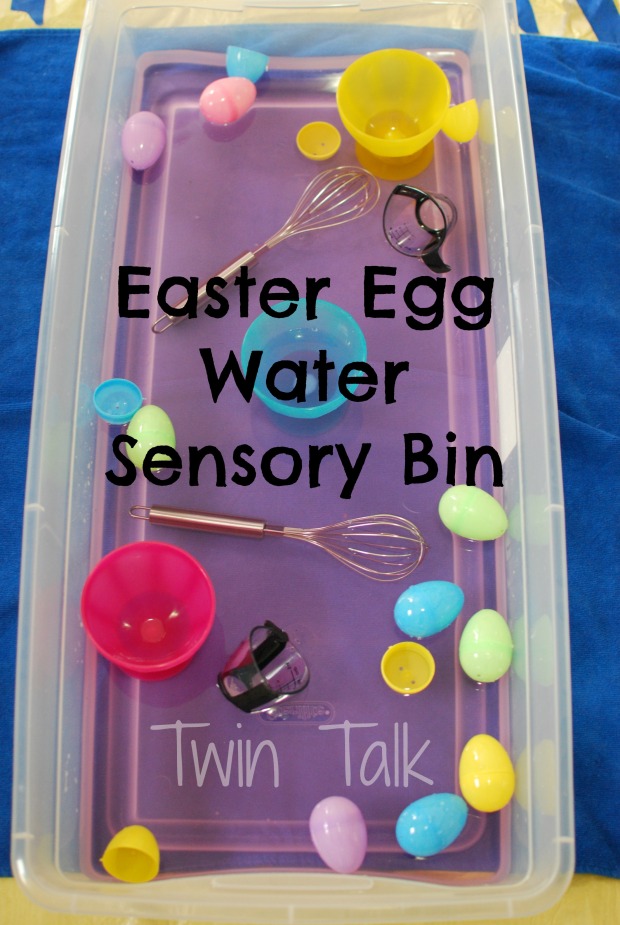 Our Easter egg water sensory bin, as with all water bins, was a hit for the toddlers. I added a few drops of purple food coloring, some eggs, and some other tools. After they got started, I also added a little soap for a few bubbles. Not a complicated concept by any means, but the eggs had these little holes in the bottom that made it fun to scoop water and pour from. 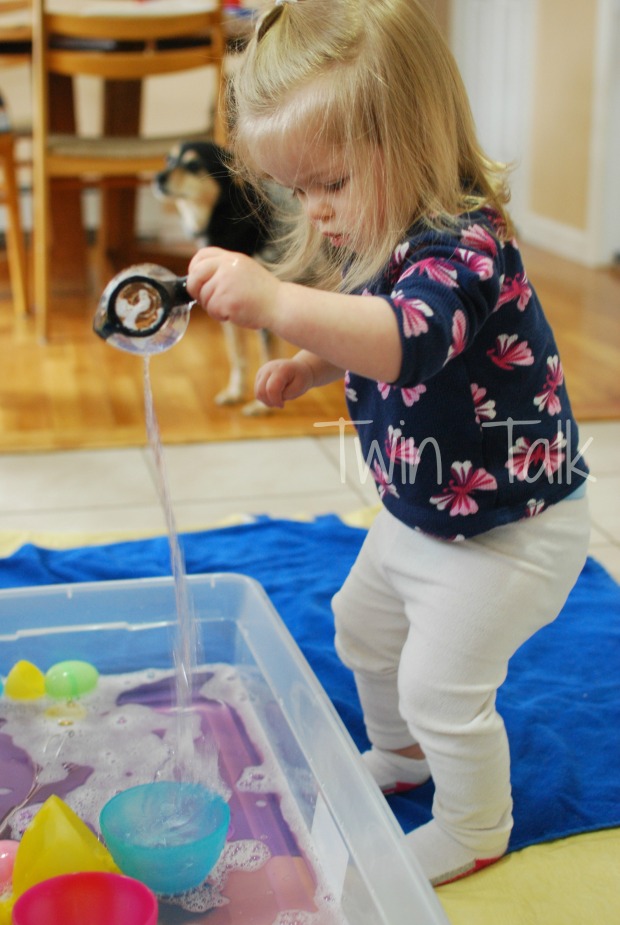 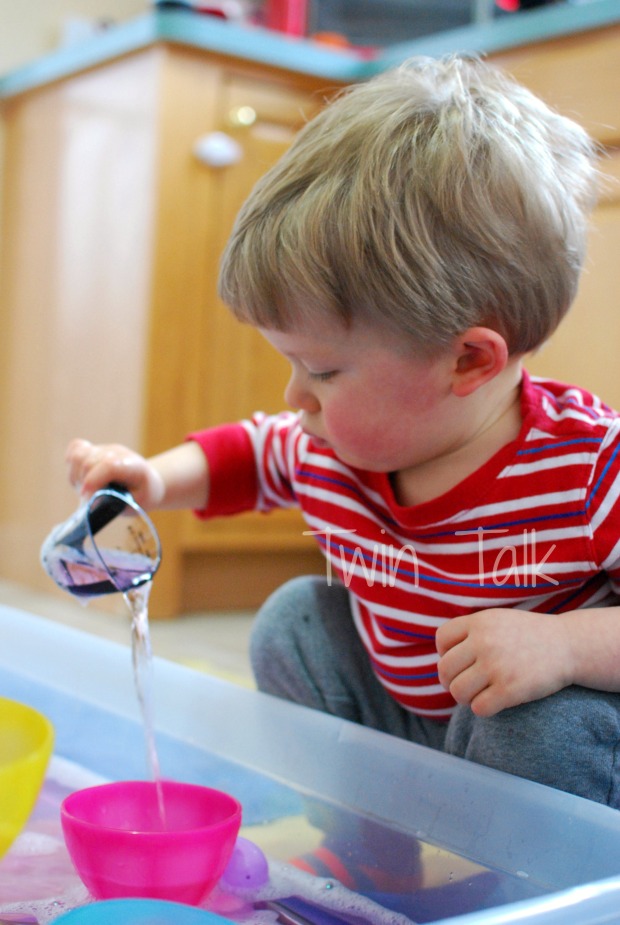 Pouring practice is all the rage in our house right now. They can’t get enough of it. 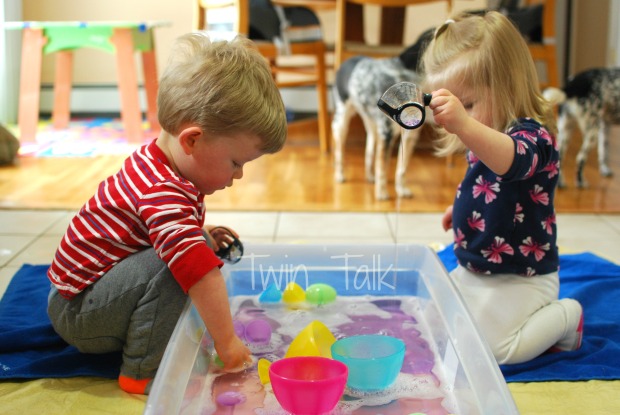 They enjoyed this water bin for a long time! 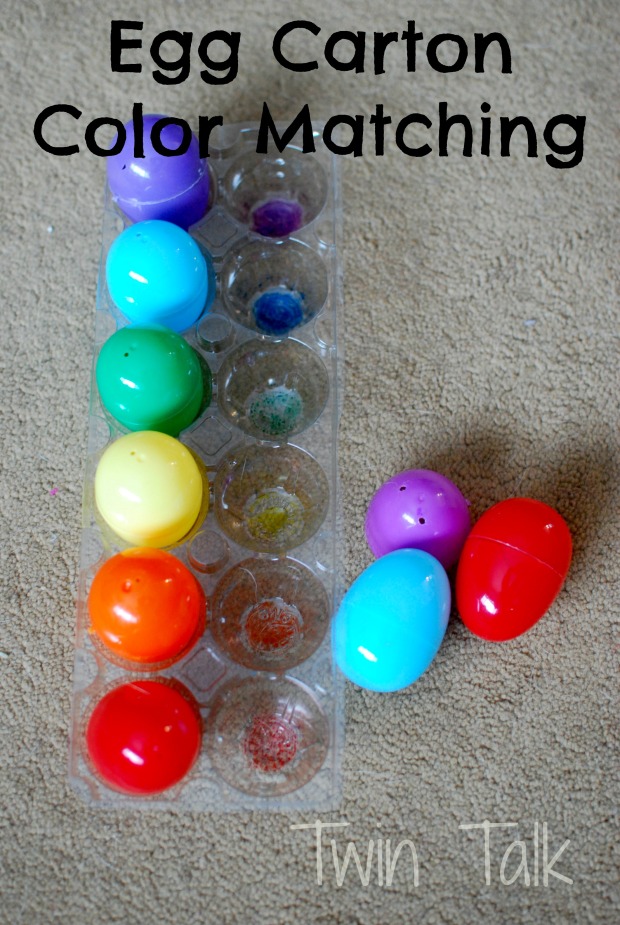 This last Easter egg activity was unbelievably simple, like so simple I can’t believe I hadn’t done it sooner. I’ve had these eggs for a long time now, sitting in an egg carton. One night I grabbed some markers and simply colored the bottoms of the carton and let it dry overnight. The next day, the twins got their eggs and put the eggs in the corresponding spots that matched the color. 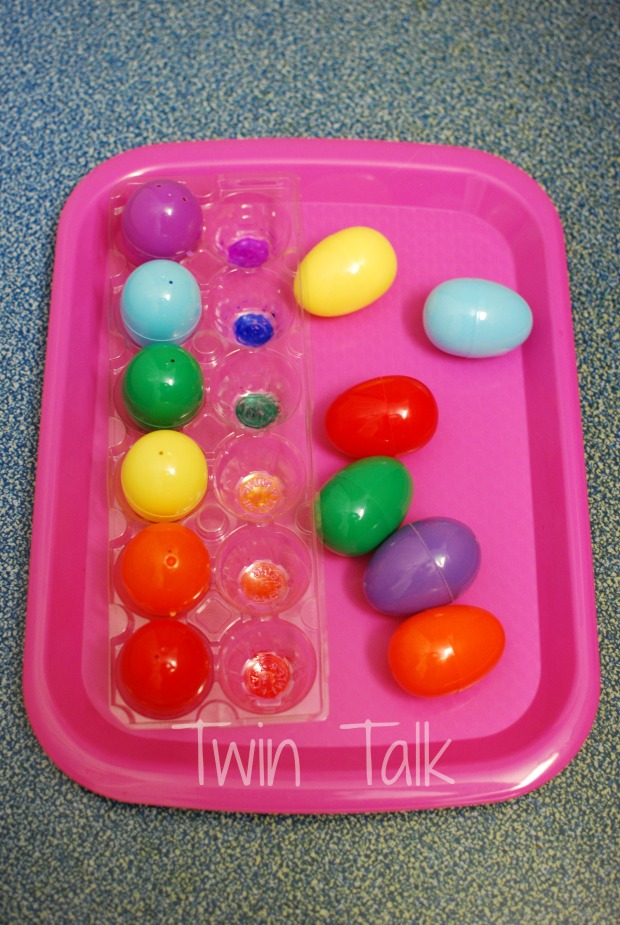 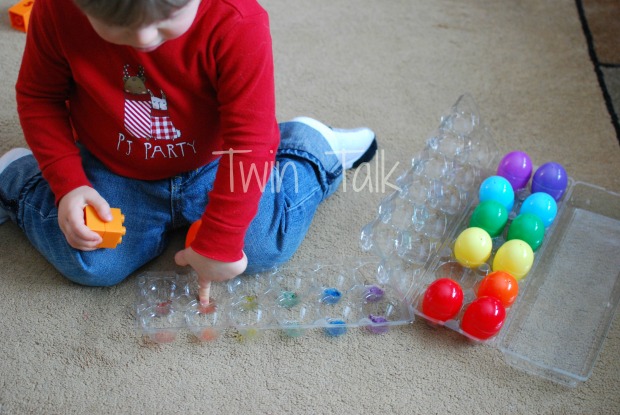 I couldn’t get too many pictures because this one was a little too easy for them – they had the eggs in correct locations in about 30 seconds, and they weren’t too keen on repeating the game more than once or twice. However, it would make a great travel activity as it’s portable and easy! The only thing I would recommend is to use a cardboard carton, not plastic, as the marker didn’t stick too well.

My goal was to find Easter egg activities and games that were simple and cheap – and all six of them fit the bill!

I’m on to something slightly more complicated (though still cheap) next. It might involve my sewing machine – we’ll see if I don’t change my mind!

One thought on “Simple Easter Egg Activities for Toddlers, Part 2”