For those of you who are new followers to this blog, my husband and I cloth diaper our 18 month old twins and have done so for exactly a year now. But let me back up.

Like most people of my generation, I was raised in cloth diapers. I was told the story a million times of how I almost swallowed an open pin (eek) and how heavy the bucket of sopping wet diapers would be when it was taken to the washer. Neither one of those things sounded appealing to me. But it saved money. It was so CLEAN – think fresh smelling laundry, drying out on a line in the summertime bleaching in the heat. It’s just what people did. So before I was pregnant, cloth diapering was not something I was scared of and I hoped to do it someday.

Well, we received TONS of disposable diapers as gifts before the twins were born, which we were more than grateful for. Boxes upon boxes. It was wonderful. In the back of my mind I thought, “Maybe someday I’ll still make the switch to cloth.” But honestly – I am SO glad I started out with those disposables. Life was such a blur. My husband and I were doing round the clock double feedings for months. My daughter was a non-stop crier. It was just so hard to be a mom for a little while. Who has time to think about alternate ways of diapering a newborn? Not this mom. I needed to slap on a diaper super quick and whisk it away when it was full of poop. I did notice that the twins got diaper rash a lot but it was still worth the ease.

Life started to become a little less hazy around 4-5 months. I didn’t feel like I was walking around drunk anymore. I could experience normal feelings again that weren’t clouded by utter exhaustion. I could THINK and not just react. Coincidentally, that’s about when our disposable diaper stash ran out. I was actually going to have to start buying diapers. I joined a babycenter.com cloth diapering group just to get a sense of what cloth diapering was all about in this day in age. Yes, there were still people out there who took the white diaper (otherwise known as a burp cloth in our house), folded it up and pinned it to the sides. But for me, that wasn’t going to work. Ain’t nobody got time for that. If I was going to go cloth, I needed to maintain the ease of use factor that came with disposables. I didn’t have time to fold and pin! There were also people who were cloth diaper junkies. More power to them, but they thrived on “fluff mail” (getting a shipment of cloth diapers) and loved to try out various brands, types, and colors. Also not me – and a massive amount of money. No, if I was going to go cloth, it also needed to be cost-effective. What was the point of doing this if I wouldn’t save money? People recommended buying a few types, just to see what we liked more and then buying in bulk after that. This wasn’t an option for me – I wanted to buy one kind only and put all my eggs in that basket.

After much research and consideration and after buying a few more boxes of disposables (which were not cheap), I bit the bullet when the twins were 6 months old and purchased 24 Bumgenius Freetime “snap” cloth diapers. If I had one baby, I obviously only would’ve purchased 12. I feel like this might sound like an advertisement but it’s not – this is the diaper I chose and I’m so glad I did. If you’re thinking about switching to cloth diapers, consider this: If you want it to be EASY, get snaps. My diapers have snaps (I’ve heard toddlers can undo their own velcro diapers). These snaps require adult strength to put together and take apart. The diapers also have thick foldable liners built into them – perfect for alternating the areas you need the extra protection. For B, I fold the top flap over in the front so he has lots of padding where he pees in the front. For C, I keep both the padded flaps stretched out, giving her more protection in the back. And the best part of all is that these diapers are adjustable, from 8-35 pounds, from newborn to potty training toddler. I’d only ever have to buy one diaper. And that’s what I did.

To keep this post from getting crazy long, I’ll skip the details and save for future posts about how I wash the diapers (no heavy bucket! no stains!), handle the poop factor (long gloves! fleece liners!) and some troubleshooting tips I’ve learned in the last 12 months. I can tell you that with two kids in diapers at the same time, this was definitely a smart financial decision for us. If we ever have another child (ha!), we’ll just use these again. And they’re a hot commodity on the cloth diaper market – I have no doubt I’ll be able to sell them for a discounted price, making at least a little money back.

The reason for this post is that I believe these cloth diapers are lending a hand to our potty training beginnings. Not that I’m overly excited for endless “I have to go potty”s and accidents and bed wetting. We’re not there yet, thankfully. But I’ve heard that cloth diapers do speed up the potty training process and so far that seems to be true for us. At a certain age, no toddler wants to be wet. It’s cold and uncomfortable. It’s like leaving a wet bathing suit on for a few hours at a time, except it’s thick cotton. Yuck. In a disposable, its job is to hold the urine so that you can go longer without a diaper change, meaning that the kids won’t feel it. At least not for the most part. In the last few weeks, C has started declaring that she’s “wet” – holding her diaper and announcing “wet, wet” over and over again. And when I’ve gone and checked her diaper, sure enough, she’s been wet. I think she feels the discomfort from this. I’m encouraging her to keep telling me when she’s wet. Her noticing this – I take it we’re at the beginning stages of potty training. And for B, he does not tell me when he’s wet yet, but he is now going many hours without going to the bathroom. In fact, he mostly only pees when he’s napping or in the car. But he’ll hold it for hours. Once he goes, he goes a LOT and sure enough, it’s time for a new diaper. I can imagine that there’s nothing worse than a cold, wet diaper. So perhaps our potty training journey is getting a boost, thanks to our cloth diapers.

This was soon after I purchased them a year ago.

These were from over the summer, 6 months in.

And here they are two months ago, 10 months later and they still held up well: 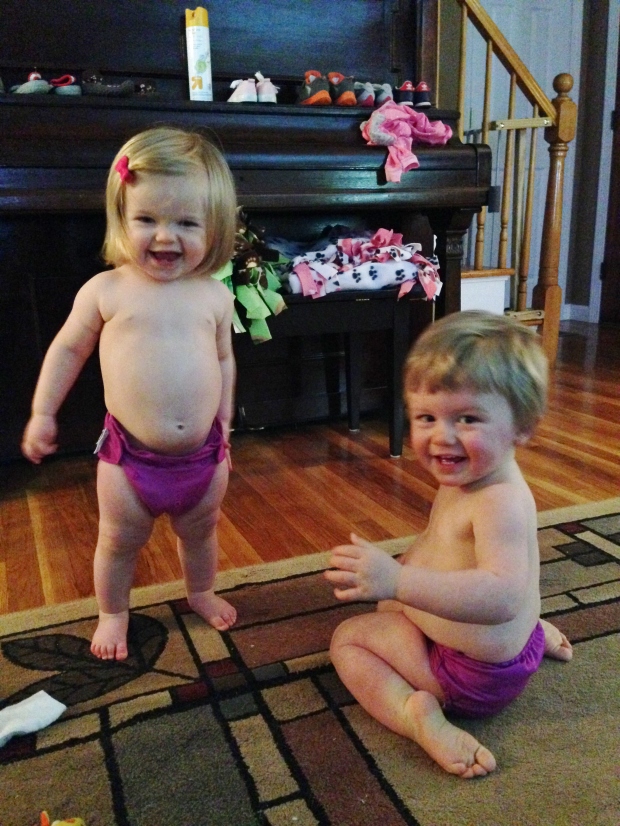 It was a decision I never regretted and in our journey to potty train these two crazies, I’m finding added benefits from cloth diapering I never knew existed.

All right, people. My brain is buzzing with excitement over my appointment with my new ND on Thursday. Through the ICLW, I’ve “met” a few new bloggers who have been nothing but helpful! I appreciate all of your comments, by the way, and a lot of you know so much more than I do, and I’m eager to come to you with questions.

Therefore, I have a few more.

1) Can someone kindly explain what Circle + Bloom is? I gather that it’s a series of audio tapes, but after that I’m lost. I have heard so many people rave about them, and again, I’m just beginning to embrace the idea of natural remedies for health and fertility issues, so I definitely need a bit of convincing. I’m guessing this costs a lot of money. But like I said, people rave about it. Given that stress runs decently highly in my life (especially in the form of health and wellness issues), I’m curious. Should I look into this further?

2) I have done it. I have signed up to follow the journey of a blogger who has a child. There are a few of you out there who have one child already but are struggling with the second, but this is the first blog I have followed where she predominantly writes about issues related to already having a baby. I suppose in doing this, I am subconsciously telling myself that I will be pregnant soon. Not necessarily this cycle, but soon. Soon enough that I am excited about reading posts related to raising a baby. I don’t intend to follow a lot of baby blogs, yet, because I suppose after a while I’ll find myself depressed. But this blogger is very cool. Check out Cotton Bottom Mama if you’re interested – she’s a very “green” mother, which is something I hope to be eventually. She does cloth diapering, for example. We plan to go that route as well someday (of course we’ve already discussed it), though N still needs a bit of convincing. The price for diapers is enough convincing for me! Anyway, she’s got a ton of info on that topic, as well as other “green” issues. Best of all, she also suffers from Hashimoto’s, and went gluten-free and sugar-free. There aren’t many people I know of who have this. She’s doing very well, as she met with her ND and got pregnant five months later. So here’s hoping.

Anyway, this all leads me to my second question. Do you follow any bloggers who have a big focus on health and wellness? What about food allergies and autoimmune issues? I would love to find more people like Cotton Bottom Mama. It’s so nice to have a support system.

I wasn’t going to post today, so I’ll keep it nice and short. I’m grateful for the activity on my blog. I’ve written almost 100 posts, I’ve had over 5,000 views, and I’m lucky enough to have almost 60 followers. So thank you. Blogging has taken, once again, a new turn in my life, as I find myself telling friends and family about you and your stories. You’ve suddenly become very real, though we’ve never met. Just another perk of blogging about infertility!