It has been three days since my last post, and I feel like it’s been years. Apparently I got used to frequent postings! I wasn’t going to post today, either, but I figured doing a little recap wouldn’t hurt. The reason I haven’t posted is because…

…I’m crazy. Totally insane. I’ve lost my mind, my sanity, I am completely nuts. All thanks to the fun and exciting TWW.

I am 10 DPO. A little cramping (feels like AF cramping, but then, it always has) here and there, hungry constantly (hello, emotional eating), and temps above the cover line. That’s it.

Last cycle, I spotted on 9 and 10 DPO, and got AF on 11 DPO. Hence, you can imagine my excitement at not having any spotting yet. That said, if I did spot, it could be implantation spotting, but since I wouldn’t know for sure, for my sanity I’d just like to not have any spotting, please. The other thing in the back of my mind is that I took B6 pills this round and the non-ovulation round as well, to lengthen the luteal phase. I have heard success of doing this with this pill, so I gave it a whirl. My fear is that my LP has been lengthened, but I’m not pregnant, causing me to wonder for additional days than necessary about why I haven’t spotted yet.

It’s only 10 DPO. I am not testing, yet. However, some people do get positives on 10 DPO. But what if I don’t? I can’t put myself through that. It will have to wait.

Ha – can you see how this post is going? It’s a whole bunch of rambling. While annoying, thank you for allowing me to spill it out, because that is exactly what goes through my head all day, every day. I woke up at 5:00 this morning, took my temp, started Googling. In bed. When I should’ve gone back to sleep for 45 minutes. But I couldn’t! How could I possibly sleep when I am this close to this amazing, life-changing goal? 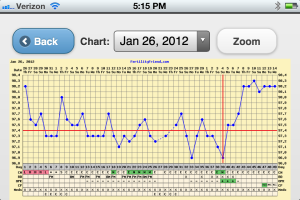 I’m over-analyzing my chart, I know. However, does it concern you that my post-o temps are so…flat? Where’s the spike, for implantation? Where’s the drop, for implantation? This chart tells me I haven’t implanted anything yet, if I was going to at all. My thermometer is new, it works wonderfully..I’m a big fan. It’s not the thermometer. I’m really stuck at 98.2. If it jumps up, just once, a big jump, I will be thrilled. But I’d rather have it flat than a drop, too. This is torture.

I wasn’t like this last time. Not this bad. Partly because #1 I knew my timing wasn’t great last time, so it was a shot in the dark. #2 I thought it unlikely to happen the first time around, and #3, I had spotting at 9 DPO so it was all over before I could even consider all of this.

There have been so many BFP’s lately, especially with so many of you bloggers, and I just feel like…this could be so nice, to join you. If it doesn’t happen this cycle, I know it will another cycle. I know I’m going to have a child. It’s just…so hard to start all over. To take Clomid again, go through this waiting thing, again. Wait to ovulate, wait out the TWW. I can’t believe I am so close and I could simply be about to start it over again. Or…maybe not. Maybe I have something here. The timing was practically perfect, after all. I just wish these stupid AF-like cramps would go away and stop worrying me.

There’s a lot riding on this cycle, and I’ve really put my everything into it. I’m hoping for a miracle!

My body played a really cruel joke on me. And I totally fell for it.

I got AF today. I think. I feel like everything’s a question now, but I’m pretty sure I did. Midway through the day, I was giving a writing lesson and got those tell-tale cramps. I went to the bathroom at lunch shortly after, and sure enough. A color and consistency change. Pretty sure that’s AF.

So the joke’s on me. I felt like total crap, and I still do, but today it’s changed into a throat thing, so I guess I was really getting sick after all. I had spotting, which I never, ever get, on 9 and 10 DPO, which would’ve been right on target for implantation. Of course, I’ve never really had a normal period before. I guess I spot first. I had high temps, even during spotting (which was a sign for concern regarding implantation..shouldn’t it dip?). That said, I STILL have high temps. Well, I did this morning. Most people, I thought, saw a drop in temp on CD 1. But I did not. After some quick googling (yeah, I caved), I found that some people’s temps don’t drop until midway, or even after AF.

So. What’s most frustrating, I think, is what happened to me mentally since the spotting began a few days ago. Up until that point, I was calm, cool, and collected, and really, I breezed through the TWW. Once that spotting began I lost my composure. As it went on yesterday, and I continued feeling sickly, and then the spotting turned to nothing and my temps stayed high, I really started believing that a miracle could’ve occurred. I started walking around feeling like I was pregnant, thinking that yes, it was most likely true. I considered how I would tell my family and close friends, and my husband. He, of course, has been following this every step of the way, and was equally disappointed, which was sad for me, but followed up with “We’ll keep at it” and an “I love you”.

I made a rookie mistake. My first ovulation, thanks to Clomid, and I allowed myself to believe I was pregnant. And then, I got incredibly anxious/excited/nervous about it. Last night I could barely even say the words out loud, that’s how anxious I was about it. I found out I was nervous, which I never expected I would be. Not calm in the slightest.

In the coming cycles, I will hopefully have learned my lesson. I know so many of you out there learned this lesson a long time ago, and I’m just catching on now. Do not, under any circumstances, get your hopes up. Because when you start to believe it’s true, and then it’s not, it hurts more than you ever thought it would.

I’m not crying or anything, I’m just….totally bummed. But it’s CD 1, I’ll call for Clomid tomorrow, and the pills will be in my belly in the next week. Onwards and upwards.

Well, if there’s one thing I have learned so far while struggling with fertility it’s this: the highs are so high, and the lows are very low. Up and down, up and down. It’s a roller coaster ride.

I felt pretty low when my OB-GYN wouldn’t help me anymore, and sent me to an RE. I felt giddy when I found out I could see this new RE in less than a week after that gyno appointment. I felt equally happy when my RE did an ultrasound and said, flat out: “Well, it looks like you’re not ovulating. That’s the problem.” I was so happy to have an answer to my long cycles, irregular periods, and lack of ovulation.

Then I had to wait. Waiting for extended periods of time always drag me down. I had to go through an entire cycle before I could start Clomid, because my RE meeting that day was already at least CD 5 or so. Then I needed Provera, of course. Then I got my Clomid.

Predicted ovulation time for Clomid came and went. I read online that many people found they had a late ovulation when on Clomid, and I tried to keep that in mind as I felt myself get lower and lower. I got into that funk.

Well. Last Thursday I went for my CD 21 ultrasound, which is typical for when you’re on Clomid. I panicked at the lab, because the less-than-professional young nurse was giving me crap about coming in too close to the closing time. Luckily, she still took my blood. Of course, obviously I didn’t ovulate. That’s what they were checking. I temp every day, check my CM, use OPK’s, and faithfully chart it on Fertility Friend. I didn’t ovulate. So imagine my surprise, on Friday night, when I got home at 5:00 and found this message on my answering machine:

“Well, it looks as if you’re about to ovulate, which is good….hmm…if I were you I’d go have a really fun weekend (as she snickers). We want to see you Monday for blood work again, to see if you did ovulate.”

What?? I was actually about to POAS anyway, so I went ahead and did it, and got this beautiful image: 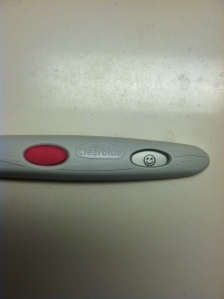 That made my day. In all these months, I’ve seen that smiley face one time, just once. I think it was a fluke. I almost believe it never even happened. Now, it did. I’ve spent the weekend analyzing my new friend, Ovulation. Who knew? I had some major cramping all Friday and Saturday, which was a new feeling. It felt like period cramps, but of course I knew it wasn’t. My left side (near my ovary) was more sore than the right, so I assume I ovulated through that one. I have no idea, this is all new to me.

I’ve been back on a high. That said, our BD timing wasn’t…perfect. Not exactly how I wanted it to be, and I was a little concerned. But it was still there, and I’m just going to hope it was enough. I had a smiley face two days in a row, and then today, back to nothing. I assume it happened, but my temperature hasn’t risen yet.  A quick google search told me that some people take a day or two after ovulation for their temps to rise. Mine better rise. Granted, tomorrow I’m going for another blood test, so I’ll find out there if it happened or not. But it sure felt like it happened.

So I’m basically about to start the two week wait (TWW). Yuck. I have spent enough of my brain cells on all of this recently, so it would be really nice if I could just not think about it. I’m already talking myself out of it working (since the timing was not as ideal as it could have been) and planning on fixing that in the next cycle. I can’t get my hopes up.

Yet, I’ve done something bad already – I’ve allowed myself to daydream about that wondrous day when I find out that I am, in fact pregnant. Will I cry? Scream? Laugh? Stare at it blankly? How will I tell people? Will I tell people?

Why am I thinking about this??

Not yet. One day at a time.