Today was a day off from work. Today reminded me of the time I stayed home for a full year and pretended to be a stay-at-home mom. Today, I had big plans.

I try to remember, as often as I can, that “this too shall pass”. Both in the good way and bad. Sure, the meltdowns will end eventually (right?!), and the kids will be more independent, and perhaps they’ll even argue less in the car (orrrr, maybe not). But at the same time – my kids will be MORE independent (and older!), and won’t want to see what silly crafts and sensory activities I have planned for them. They’ll want to talk with their friends and watch TV (or whatever kids want to do these days….)

Sure, I’ll have a clean house one day. I’ll have a hot meal on the table by the time my husband gets home from work, and supposedly, everyone in my house will eat said meal. But then, the kids will be grabbing a bite between getting home from soccer practice and wanting a shower, or needing to work on a science project.

Life will be hectic, but in a completely different way.

I’ll stress less about the veggies my kids consume, but I’ll stress more about whether they’ll be broken-hearted if they don’t make the basketball team, or if they’ll face the pressures that so many teens do today.

I’ll still be worrying, but about different things.

It’s a passing season, the part of life I’m in right now.

So I try to remember this on days like today, when we hurry out to a new fun place (a museum that totally sucked, by the way. Like, the worst.) I’ll be ready with my camera and can’t wait for them to have a wonderful time until – they don’t.

And I’ll remember this when I look back on how my son stood in the “craft” room at said museum, straining to poop for a good, oh, 20 minutes while the kids around him colored and talked and stared at him. He did nothing but work on that, all 34 pounds of him.

Or when two older girls ran smack into him, and he fell to the ground – not crying, but shocked. Looking for me, he scrambled on his hands and knees across the room to where I was and hugged my ankles tight, as if by holding him I could transport him to his comfort zone and save him.

And after, when we hurried to the restaurant that was my twins’ favorite, and the mac and cheese burned my son’s mouth, even though I kept blowing on it and telling him to wait, and he screamed and spit it out and I caught it with my hand and my sleeve. And when they almost fell asleep in the car which would’ve ruined today’s nap, which wouldn’t have allowed me to sit at this computer right now.

And when one little boy didn’t want to take that nap, and threw a huge fit, flailing and screaming that he “didn’t want to sleep, I just want to playyyyyy!”

When one little girl runs squealing away from me as I try to get her ready for nap, with a huge poop in her diaper that I pray she doesn’t smush, to save me the mess (and her pants).

When it’s too cold to go outside today (at least for my liking, 11 degrees is a bit too much), and I’m wondering how I can make this afternoon fun and different, certainly to make up for the lack of fun we had this morning…..

I try to remember the change of seasons, and honestly, with all of this chaos and exhaustion, I wouldn’t have it any other way.

Truly, so far this is my favorite season and I’ll be sad to let it go. 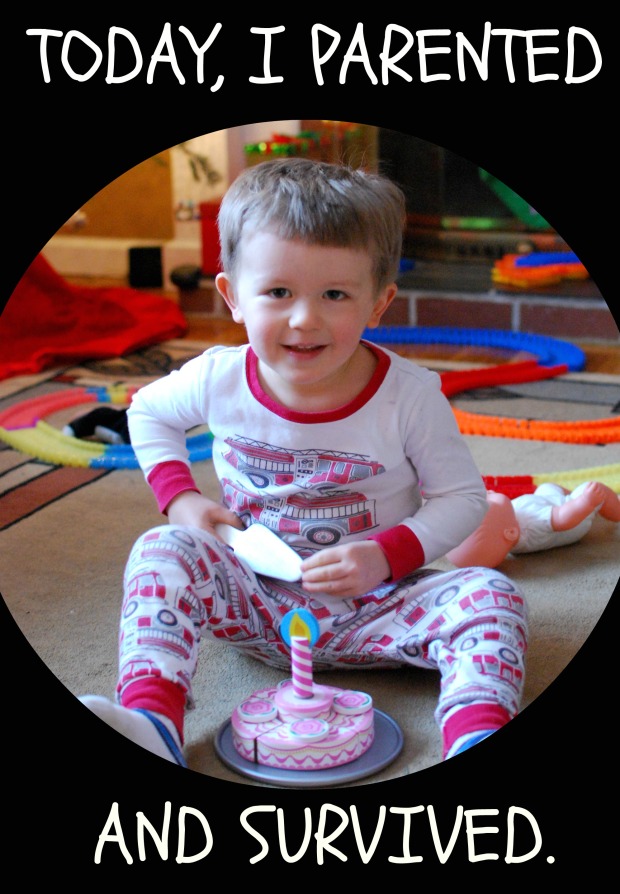 This morning, my 2.5 year old son came downstairs, ready for breakfast. But he was cranky. And for no reason, he pushed his sister.

In that moment, I must admit, my patience bar was charged to 100%. I slept well and later than typical. I hadn’t seen my twins since the night before and was willing and able to put my best face on (unlike at night, when my battery runs out and I’m running on empty). Therefore, I didn’t let this go – I chose it, not realizing what I might be getting myself into.

After removing him from the situation, he proceeded to hit the dog hard, and then hit me. As I continued to put him back in the living room, I added that he needed to say he was sorry to his sister, to the dog, and to me. Yes, I know that’s a lot of apologies. But it felt right at the time and I went with it.

For the next 45 minutes he stayed in that living room. He wailed, he screamed, he shouted, “I want to HIT! I want to THROW THINGS!” His sister had her entire breakfast and he still wouldn’t apologize. Every few minutes I checked in on him – “Are you ready to say you’re sorry to C for pushing her?” “NO I’M NOT READY! I just want to eat!” I knew I couldn’t back down, and my patience was surprisingly still intact, even through the sobbing, “Let me out, Mommy!”

I held firm. Finally, almost an hour in, over the baby gate blocking him from us, he mumbled, “Sorry, Mommy.” “Sorry for what?” I asked. “Sorry for hitting you.” And he gave me a hug. Fabulous. 1 down, 2 apologies to go.

He wouldn’t apologize to the others even after I told him how proud I was that he did the right thing and apologized to me, and that he could be eating breakfast right now. Stubborn, stubborn. But finally – finally, he did it. He apologized to C, he apologized to the dog. Success!

Unfortunately, the meltdown didn’t end there. It was time now to pick out his bib and the one he wanted was dirty. I sat with him in the den, surrounded by other bibs he could choose and after screaming and throwing himself on the floor, he laid on a dog bed and calmed himself. 10-15 minutes more passed. And finally, he chose a bib.

He was ready for breakfast now, an hour and 15 minutes later. He pulled back his chair, and…..couldn’t get the straps “right”. Didn’t want to climb in himself. Didn’t want me to put him in. Didn’t want Daddy to put him in. Wanted to eat cereal and milk on the floor. (Answer: no.) More screaming, sobbing, and the threat of a hit.

And then – he let me put him in his chair. Except there wasn’t enough cereal for his liking. He typically puts it in the bowl himself but this time he wanted me to do it. Until I did it. Then he wanted me NOT to do it. So I dumped it on the table (no milk, yet). More screaming. Attempts at hitting. I ignored him and his hand hit the table, hard.

The rest of the day has been fine.

I’ve learned a few lessons after this morning.

1)My son is sensitive to his food and sleep needs. I suppose he got that one from me. When he’s tired or hungry, he can be a bear. I knew that he just needed to eat, and that once he did he would be much better, but I couldn’t let him get away with hitting and pushing. I chose to allow this to continue instead of backing down, which I don’t always do.

2)I can be a good mom. Look, after spending 7 hours a day with 24 5th graders, I come home exhausted, with the patience bar mighty low. Too low. I frequently put the twins to bed and think, “I sucked at mom-ing tonight.” Lacking patience isn’t the kind of parent (or teacher) I want to be, yet it frequently is. The allure of a Sunday with my family, of sleeping an hour later, and being with my children in the morning as opposed to just the evening made all the difference.

And I have to admit – it felt good, when it was finally over, knowing I did the right things. That I didn’t back down, that I remained calm. That B did, eventually, do what he needed to do when I wasn’t sure he ever would.

3)Lastly, parenting is hard. Parenting, I’ve realized, isn’t the goodnight hugs, the “I love you, Mommy”‘s , the sensory bins, the playdough spaghetti, the book reading. Those are the perks that come with having children, the caretaking, the loving. The best parts, for sure.

No, parenting is the worst part of having children. Making decisions and not knowing if they are the right ones. Getting in an uncomfortable, crappy situation with your children and finding your way out. Finding patience when there’s none. I suppose it’ll continue for many, many years. Curfew fights, refusing to let them take the car out into the snow (pulled that one from my own history book), dating, drinking, doing well in school. Oh, and toddler meltdowns. These are hard issues that require a lot from us, and this, now, is what I believe parenting really is.

Today, I made it. Today, I parented.