I’m all sunshine and rainbows over here since I’ve had children, and that’s mostly because of the drastic change in my life from becoming cynical, unhappy, and bitter, to elated on a daily basis. Those who have gone through infertility (and those who haven’t, of course) don’t take their kids for granted for even a second, and that’s where I’m at right now. My husband and I were talking yesterday about “when” the babies go to stay at Grandma’s house – just because it’s good for them to sleep elsewhere as they get older. I’m already having heart palpitations over that, and I told him I’m not ready! Not that we’d be handing our infants over to anyone anyway at this point, but eventually…I mean, this is coming from the girl who, on more than one occasion, called HOME from a sleepover because I got homesick and simply couldn’t stay at a friend’s house for one more minute. I’m sure I was considered the coolest kid in the bunch when I pulled this stunt in elementary school on at least 2 instances I can think of (including one RIGHT ACROSS THE STREET). Compared to my husband, who was flying across the country on his own at age 6. Anyway, I guess I’m willing to share my children overnight? Maybe? But not yet – because I’m not taking them for granted, I’m not used to them yet. I’m not ready to part with something that I’ve wanted for so long. Luckily, that’s not an issue right now.

But anyway, all these happy little dances I do every day distract from other, not-so-pleasant issues in my life – mainly, the state of my house. It’s a MESS.

I’ve never been Ms. Pristine Clean by any means, but I’ve also always enjoyed the feeling that comes with simplicity. I don’t attain this much, but I really want to. Simplicity in a house, to me, means cleaned off counters with not much on them. Cleaned off floors. No clutter. It means everything in the house has its place, whether that be in labeled storage containers, ziploc bags, whatever. The container store’s website gives me jitters just looking at the possibilities. Simplicity in a home means simple but good smells like a cotton candle, fresh air, sounds of nature. It’s hard not to laugh at this point because this is about the exact opposite of my life right now. I do long for simplicity but at the moment I have diapers that smell like pee, dogs that shed everywhere and drag their butts on the carpet, clutter that has become worthy of “hoarders” status….the TV is on, the radio blasts, the dogs bark and the kids cry. We trip over things, items go missing, and the house is still “under construction” from a year ago with no end in sight.

I’m good with most of that, especially the chaos of family life with dogs and kids. But the clutter…I hate it. I don’t have time to take care of it. And when I do have time, I don’t want to do any more chores, period. But the other day, I took pictures. Sometimes when you live inside a situation, you can’t really see it for what it is. But pictures help. I’m not going to show them all, because I think you’ll get the point. But here’s a few. 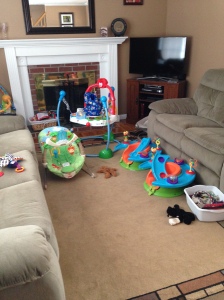 That’s not too bad, actually. Just some of the baby items (and dog toys) that hang out in our small living room.

This is embarrassing. How hard is it to take these plastic bags back to the grocery store and recycle them? Apparently hard. Really hard. In our defense, we only grocery shop on Sunday or Monday nights right before the store closes, at like 10:00. There isn’t any other time! 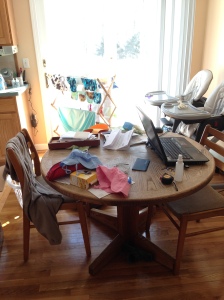 Clutter! Who uses a table for eating on? It’s our desk, our mail pile-up..our…random crap that has no home spot. I’ve got diapers drying in the sun in the background and clothes draped over chairs. It’s controlled chaos.

This is the basement. It’s absolutely like an episode of “hoarders”. Except we’re not hoarding it – I’m ready to throw the entire room in the trash. It’s construction mixed with cleaning out rooms for the construction, mixed with what happens when you’re on bedrest for 11 weeks and then bring home newborn twins. It’s disgusting.

I’ll stop there. I’m sure some of you might think it’s not that bad, but others will gasp in horror. I know it could be worse, but I think it’s bad and it makes me squirm. I feel better when my house doesn’t have clutter. But the clutter has been building for months and months, and it’s downright out of control.

So there, I’ve held myself accountable. I’m not beating myself up – we’re busy. But at the same time, there has to be a point where you say, it’s time. So I’m saying it. I don’t know how other moms do it, unless they only get like 4 hours of sleep. I don’t understand where they find the time. But I want to find the time.

For a mini baby update, in the past few days the babies have:

Hung out in the tub, sans water.

Tried on some cute hats.

Today I signed up for the gym, after not exercising for over a year, so this week should be interesting!