Wintertime in New England means it’s too cold to go out. And staying indoors all day, every day means cabin fever. So I’ve been on a bit of a personal mission to find different, DIY-type cheap and easy things for my twins to do and play with. On our first snow day, we did our pom-pom contact paper activity and then we journeyed out into the snow. It was very cold and underneath the snow was a sheet of ice in the backyard, so the twins mostly stood there. They enjoyed the different environment and the change of pace but we didn’t last too long. I took a few pictures and we went back inside.

That afternoon, I knew they needed another activity. These naps, as I’ve mentioned before, are so damn short – an hour and a half max (but they sleep 12.5 hours at night..). It’s a long afternoon from 2:00-7:00! B thrives on stimulation, so sensory bins are his new favorite thing to do.

I decided to try making a “faux snow” potato flake sensory bin, since it was a snow day after all. During the nap, I quickly gathered up my materials and set up the bin: 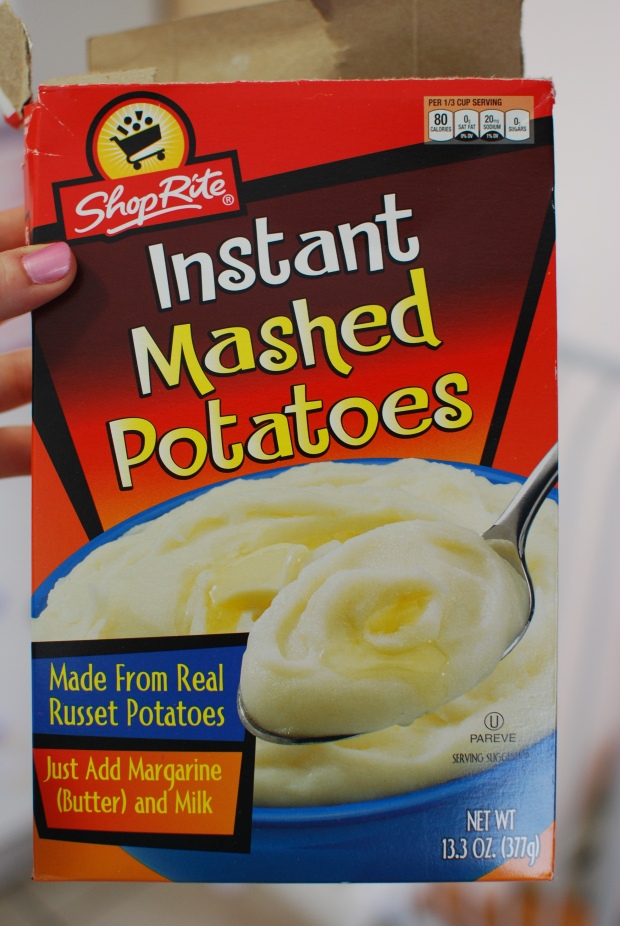 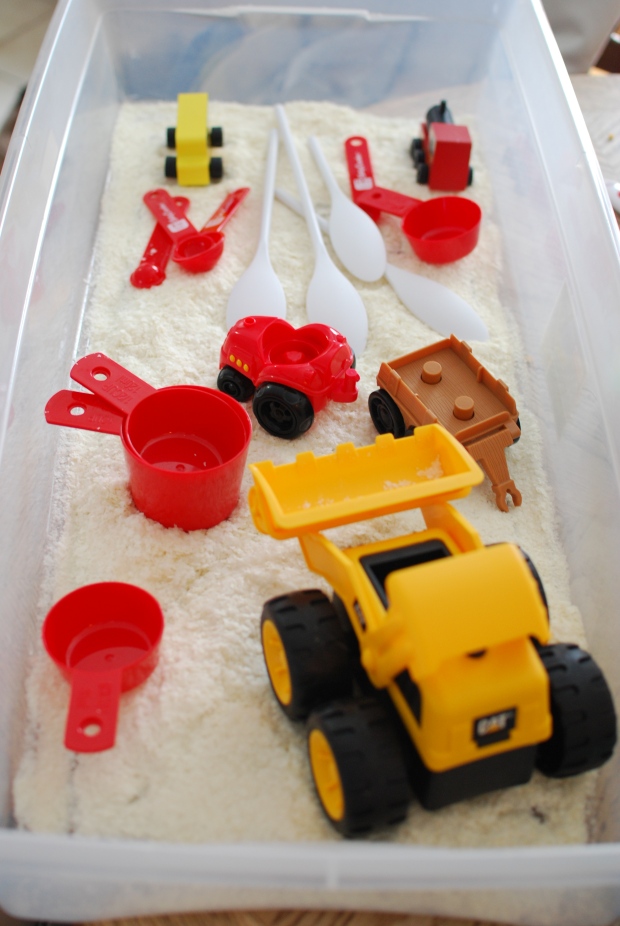 The large storage container I’m using for my sensory bin is actually for shoe storage. In typical fashion in our house, I dump my shoes on my bed while we’re doing the activity and put them back in later! I probably should buy another bin, but for now, this works. I bought a box of instant mashed potatoes and dug out my small storage container of sensory bin tools – cooking spoons, measuring cups and spoons from the dollar store and a few toys. I first saw this idea for a potato flake sensory bin at The Train Driver’s Wife, but apparently it’s a common bin to do. I put down a vinyl tablecloth I bought at the grocery store for $4 and taped it to the ground, assuming this bin might be a little messy (foreshadowing alert!). As usual, the twins dug right in. 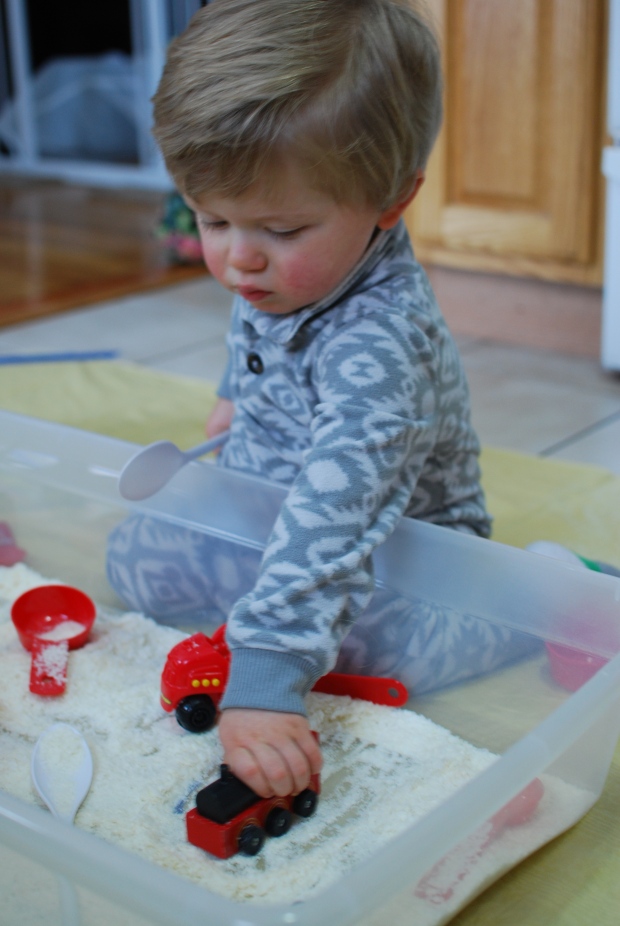 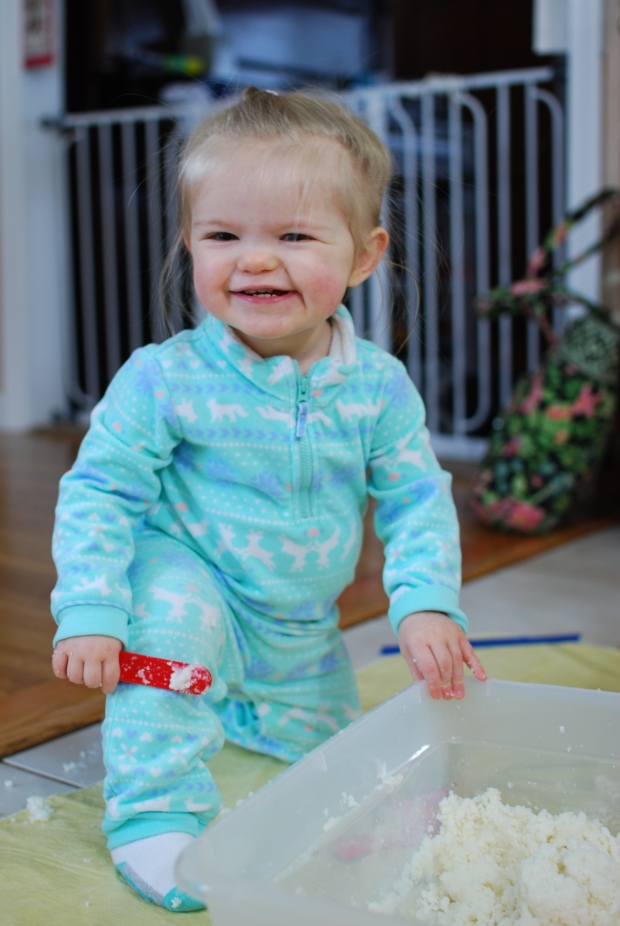 The texture of the potato flakes is very dry, almost like sand. It’s easy to scoop and drive trucks through. The twins did some stirring and transferring for a little while. They also found the fun in grabbing handfuls and releasing it, though it wasn’t always over the bin. 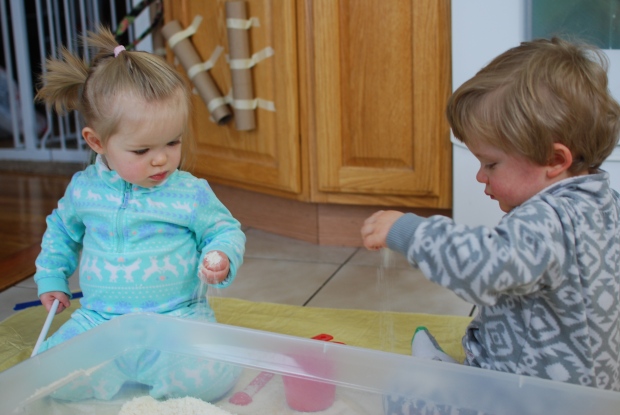 They started to get a little antsy though, sooner than I expected they would, so I added water and asked them to help me stir the bin. I continued to add water to the consistency I wanted – more “snow” like and easy to mold and squish. After that, they were able to make little balls and pick them up, pat the chunks down and really explore the texture. 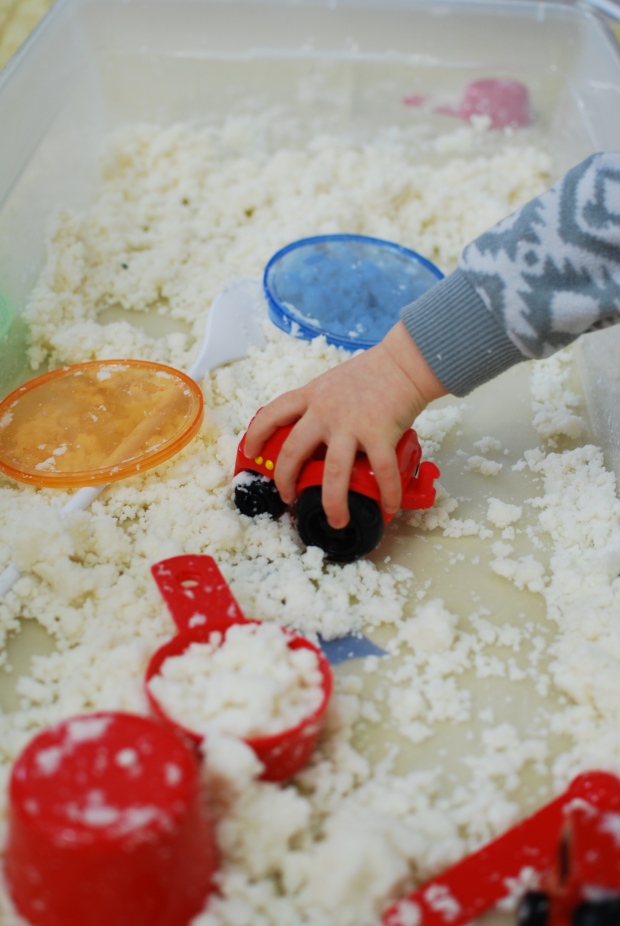 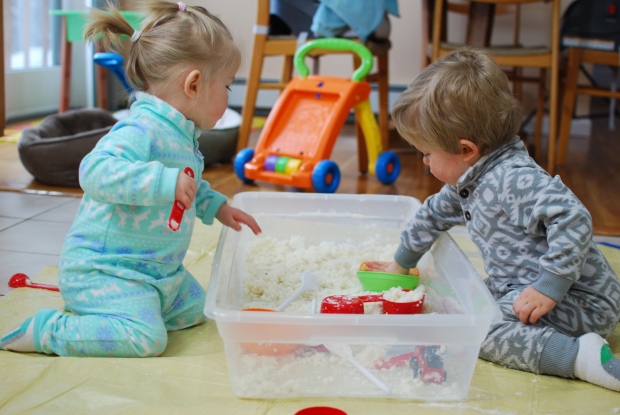 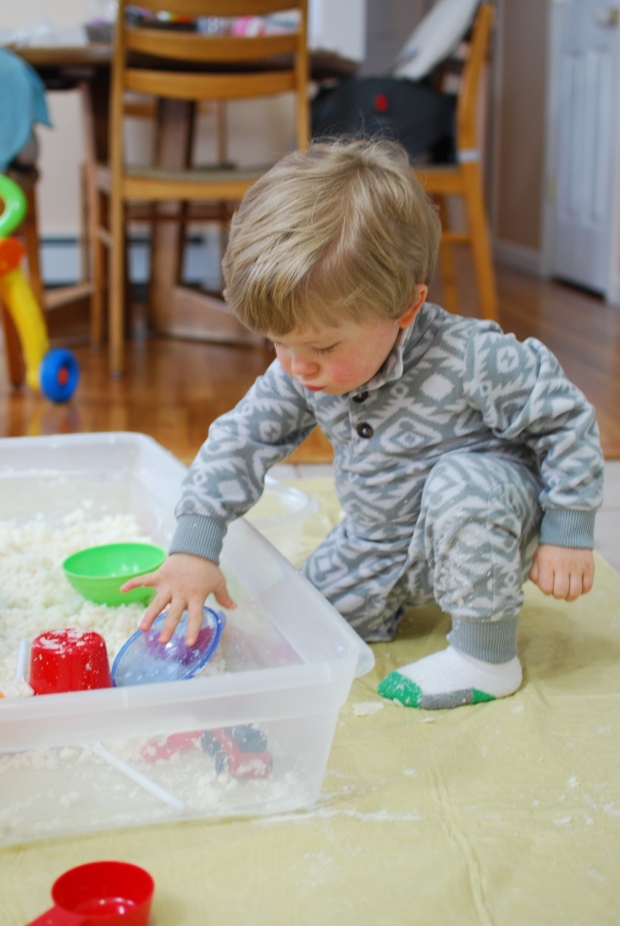 My goal with each sensory bin is to keep them occupied for at least 45 minutes. As they started to get bored of the activity, they went into their storage drawer in the kitchen full of their cups and lids and started taking them out and bringing them to the bin. I was a little conflicted for a second because on the one hand, I wanted to keep this bin going. At the same time, each container joining the game would be more clean up for me! Obviously, for all of our sanity, I let them take out some containers. Then they practiced stuffing the containers with the potato flakes and pushing the lids on. I made my goal of an hour. We finished with C learning how to drink from a little tiny cup. 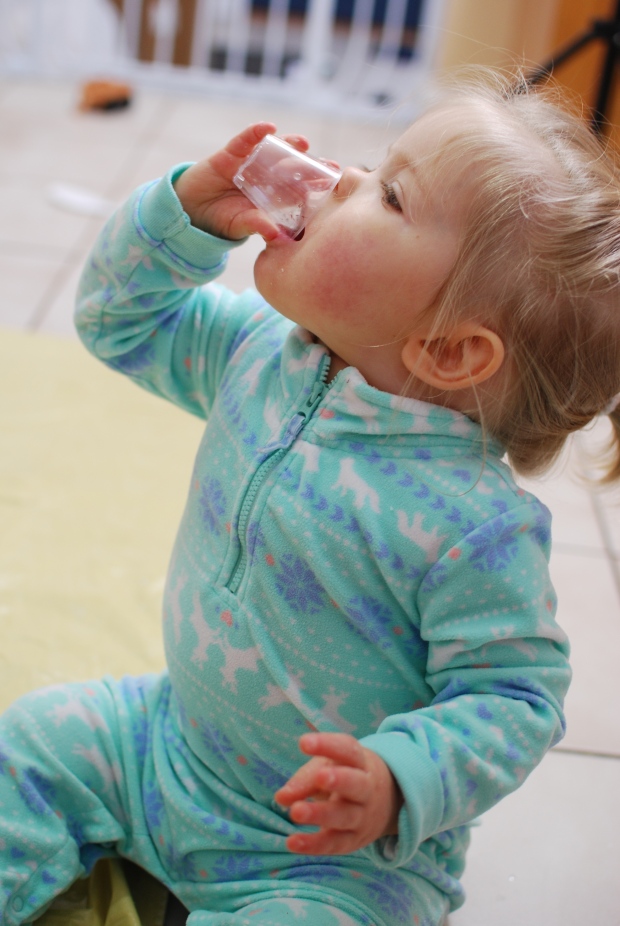 The twins had fun. I added it to my growing list of sensory bins we’ve tried. It was super easy to set up and extremely cheap. HOWEVER. The mess factor, from a 1-10, was an 8.

First of all, it smells like potatoes and spices. Because that’s exactly what it is. I didn’t mind it, but there was an ever-present odor of food in our kitchen. Second, after adding water and stirring, we essentially made potatoes. If I slapped them on a plate and heated them up, they’d be ready to eat. I expected the twins to taste it at some point but they never did. This is probably for the best though because they both hate white potatoes! More than the fact that they smelled like and WERE potatoes – it was messy. Even with a large tablecloth, inevitably dry potato flakes and wet potato chunks made their way off the mat. Little feet in socks stepped in them and then trailed them around the house. It was sticky. The dogs had a field day with their tongues doing the job of a mop all over the halls. Luckily we didn’t have any houseguests who would have been in some shock 🙂 And because it was food, each and every storage container, spoon and toy had to be washed. Next time, I wouldn’t add toys because it was hard to clean wet potatoes from them! After I cleaned it all up, I swiffered the floors in multiple rooms.

With all of that said, it wasn’t a failure at all. It was fun and the toddlers enjoyed it. I’m glad we tried it. We may even do it again – but not for a while. 🙂

We had our first snow day today. In fact, it actually rained, but I’m not complaining. I had a day off from work, at home with the twins. It seemed like the perfect day to try out various indoor cheap activities I’ve been so interested in. When the natives started getting restless at about 8:00 in the morning, we got right to it: 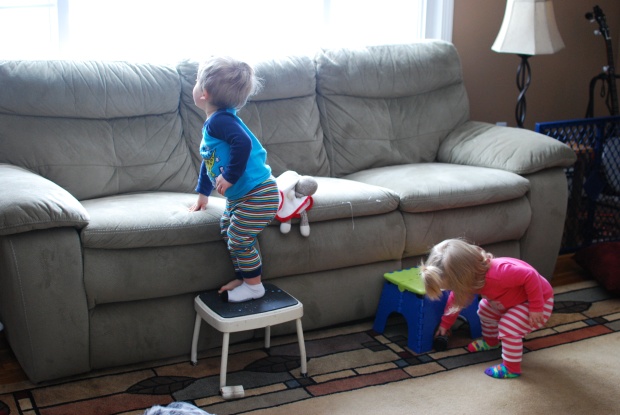 First, I cut out a few hearts and placed them in two ziplock bags with some paint. After sealing it shut and getting all the air out, I let the twins go to town squishing the paint around inside the bags. B even did a bit of driving on his bag with his cars. 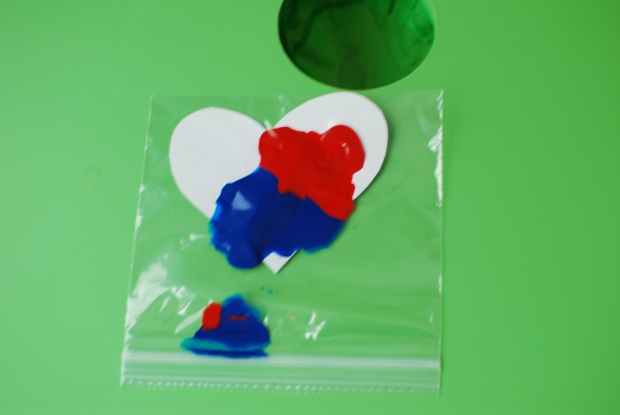 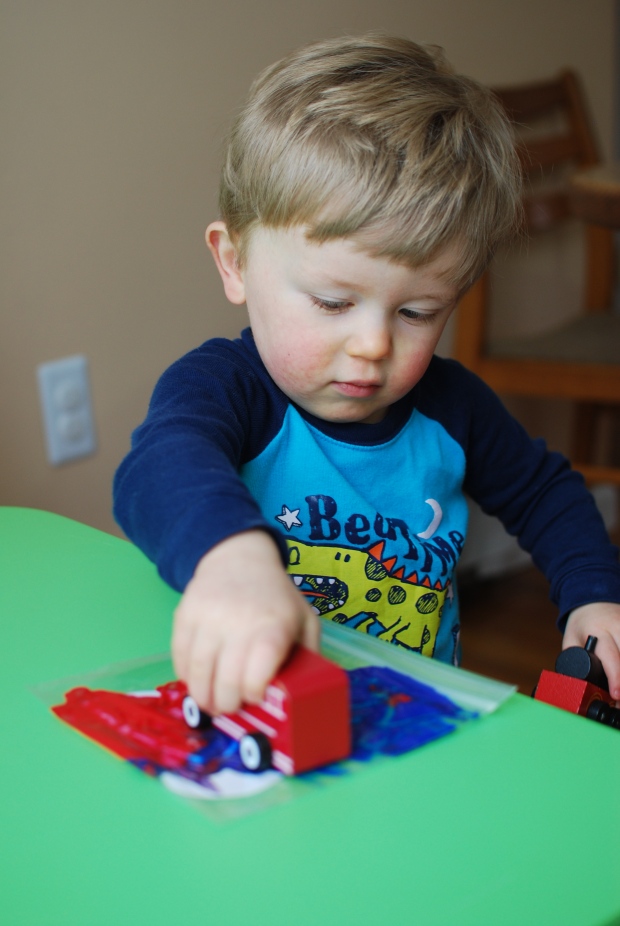 Unfortunately, this activity didn’t last long. For one thing, I didn’t have any thicker paper or cardstock, so I had to use computer paper, which was too flimsy and therefore ripped. 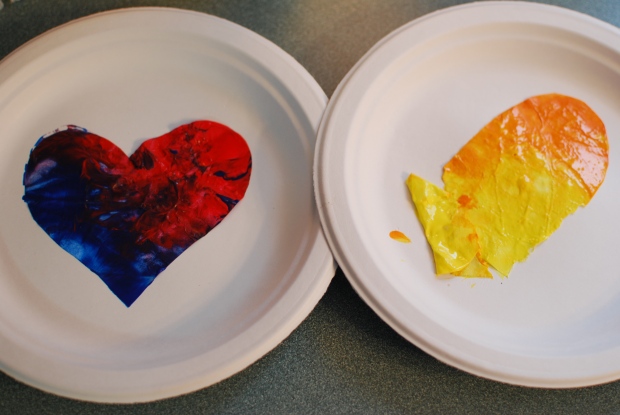 More than that though, the twins were obsessed with the paint and C was upset that she couldn’t open the bag and get her hands on some bright colors. So I dug through our “busy bag” bin (more on that in another post) and found the markers. This hit the spot: the twins loved coloring on paper plates. 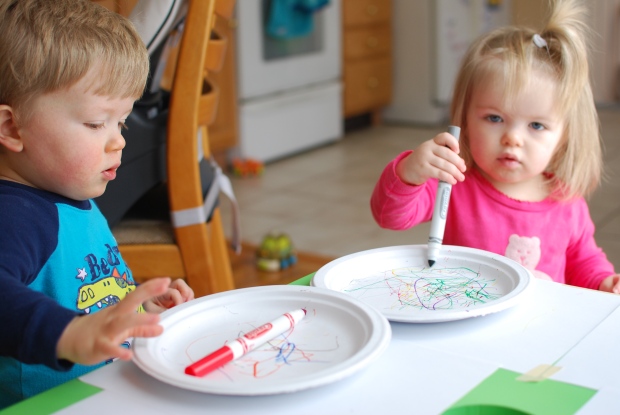 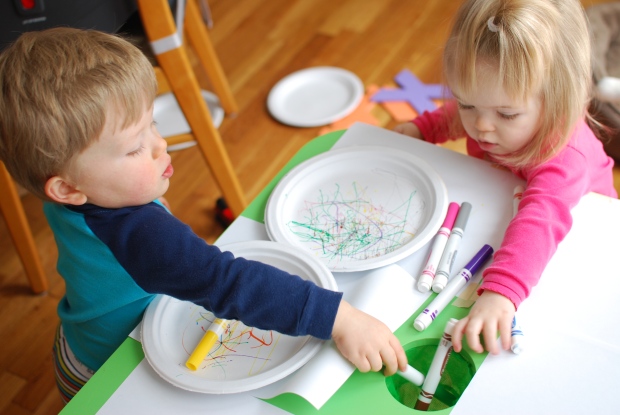 I couldn’t uncap the markers fast enough. C really enjoyed dotting her plate as she does with her spoon when she eats yogurt. B though figured out what I was doing with the caps and desperately wanted to try it himself. This involved lots of marker all over him as he grabbed both ends of the marker. So this activity lasted a bit longer than the last one, but no more than 10 minutes. Two activities already and it was only 8:30!

While I cleaned up the kitchen from the first two activities, I gave B and C two brooms and encouraged them to push and “sweep” a few more paper plates around the floor. After switching their brooms a few times, they had a good time with this one as well. 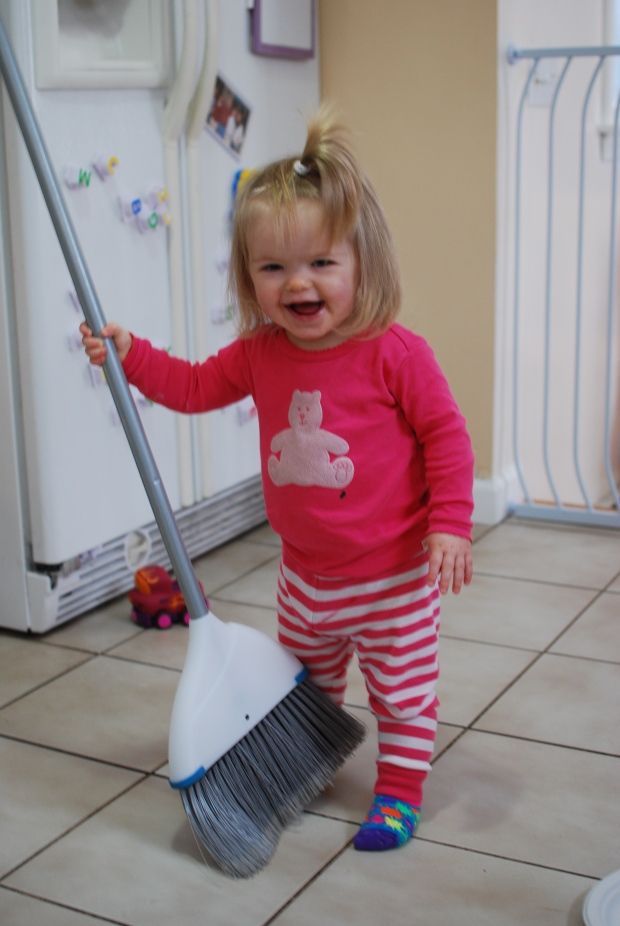 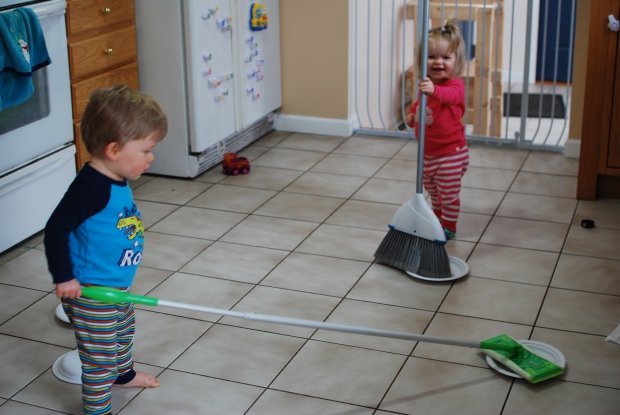 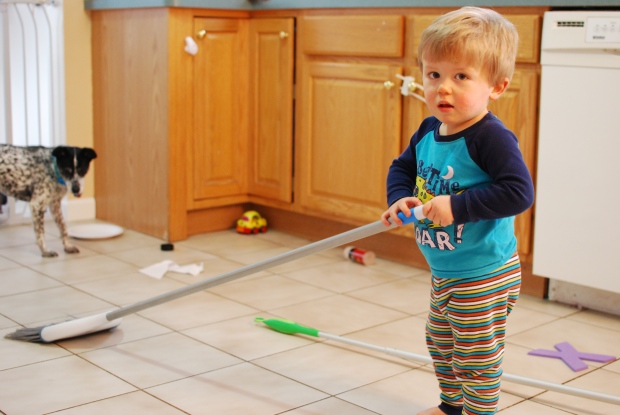 Then we found a spider. Now, I don’t do spiders. But I’m attempting to be a good role model and not stamp my feet and throw a fit when I see a bug. So I allowed it to crawl around the floor as we sang “The itsy bitsy spider”. 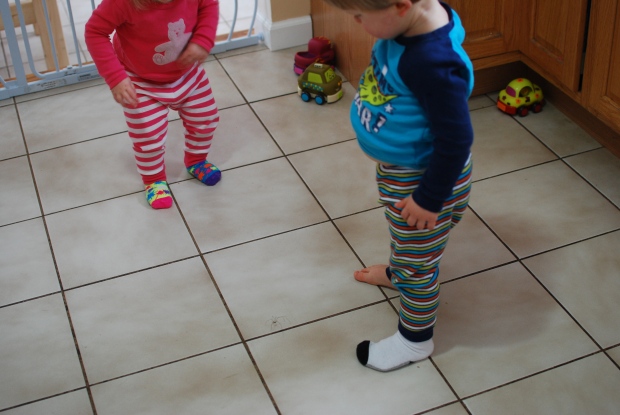 The babies loved the spider and waved to it many times. We continued with our day, taking a break so I could browse Pinterest for some quick ideas for what to do next. I found a lot that involved some pre-activity work from me, which was time I didn’t have.

So instead, I used a free resource that we had on hand – snow. Being that it was cold, raining, and the babies are recovering from bronchitis (B) and a double ear infection (C), we weren’t going outside. So I brought the snow to them. After laying down a few towels and gathering up lots of measuring spoons, cups, and other items, we explored a snow sensory bucket right on the kitchen floor (also the home to our spaghetti bin party). 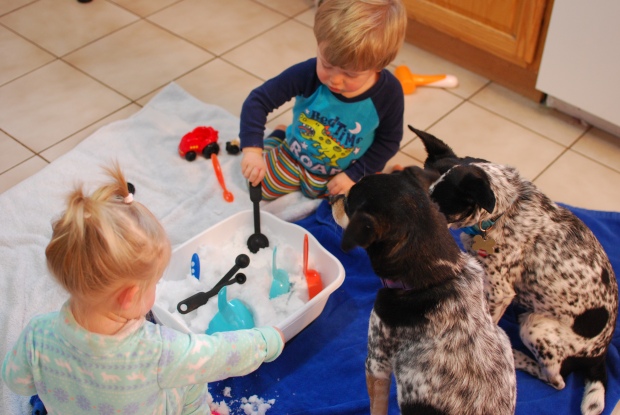 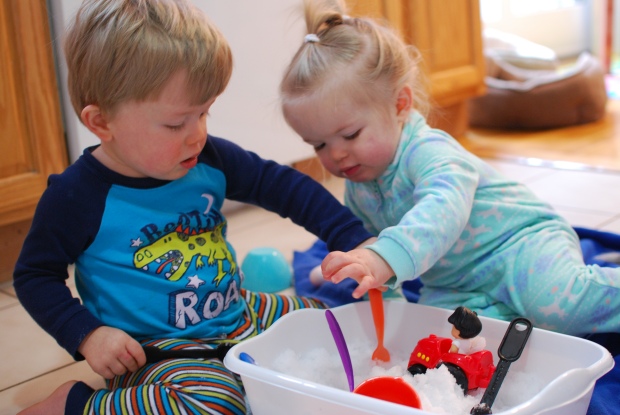 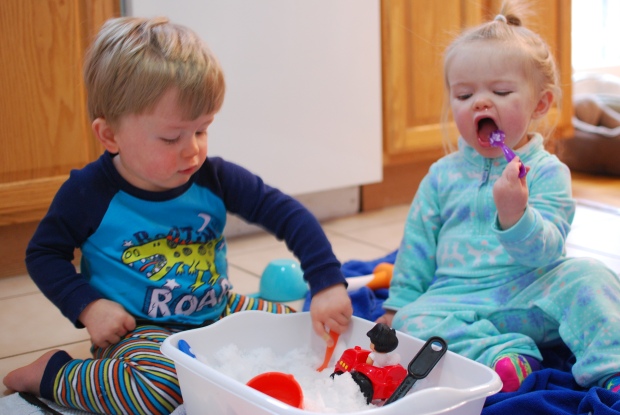 This was the hit of the morning. C enjoyed many tastes, and B intently sat there for a good twenty minutes, maybe even a half hour, just digging and stirring and transferring snow from bin to cup. He really enjoyed this. The dogs got a little crazy, but in my house that’s nothing out of the ordinary.

When C got bored, she wandered the kitchen and played a bit with another super easy and cheap activity for toddlers: a paper towel tube and pom-poms. She plays with this one often actually. 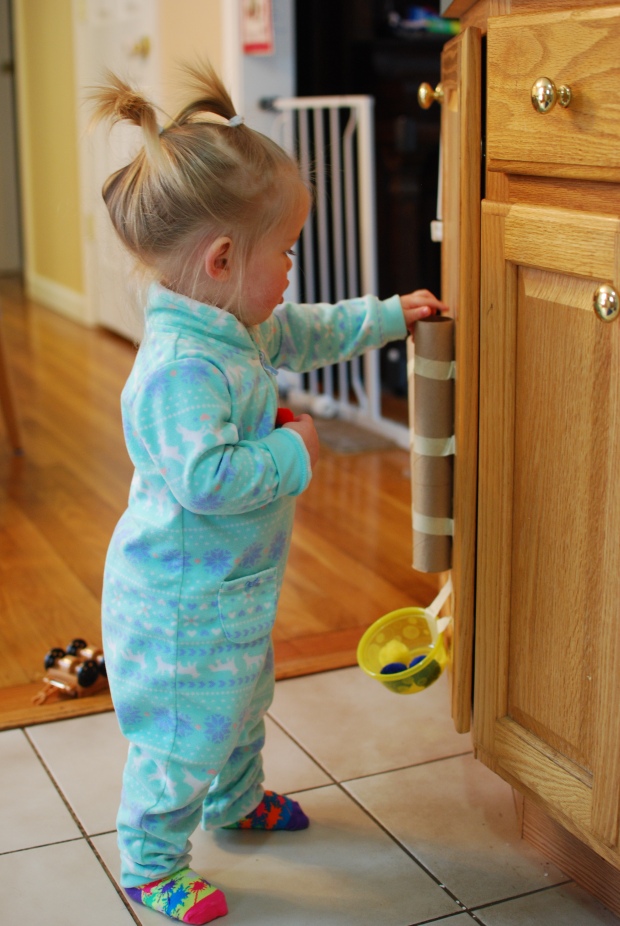 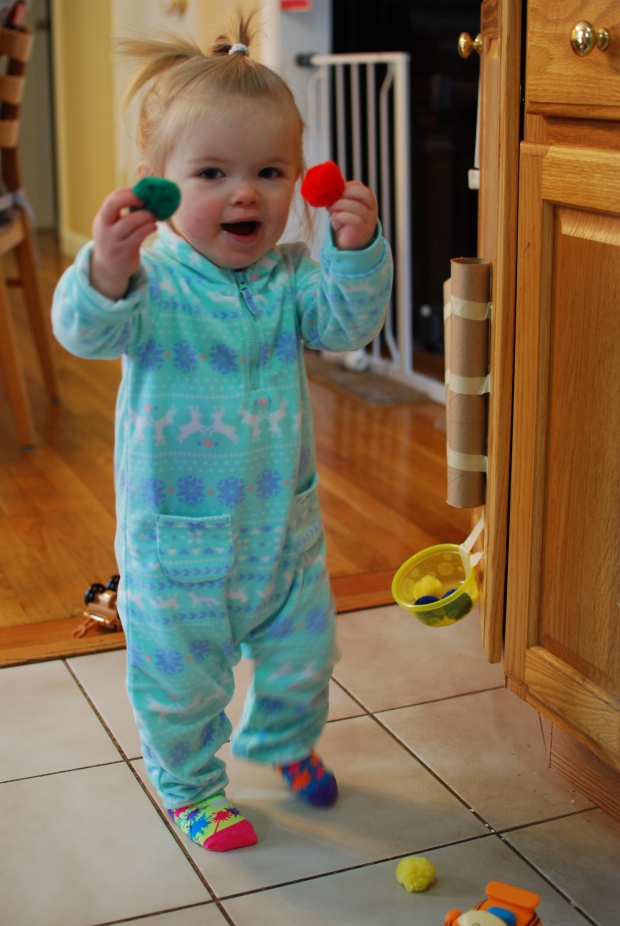 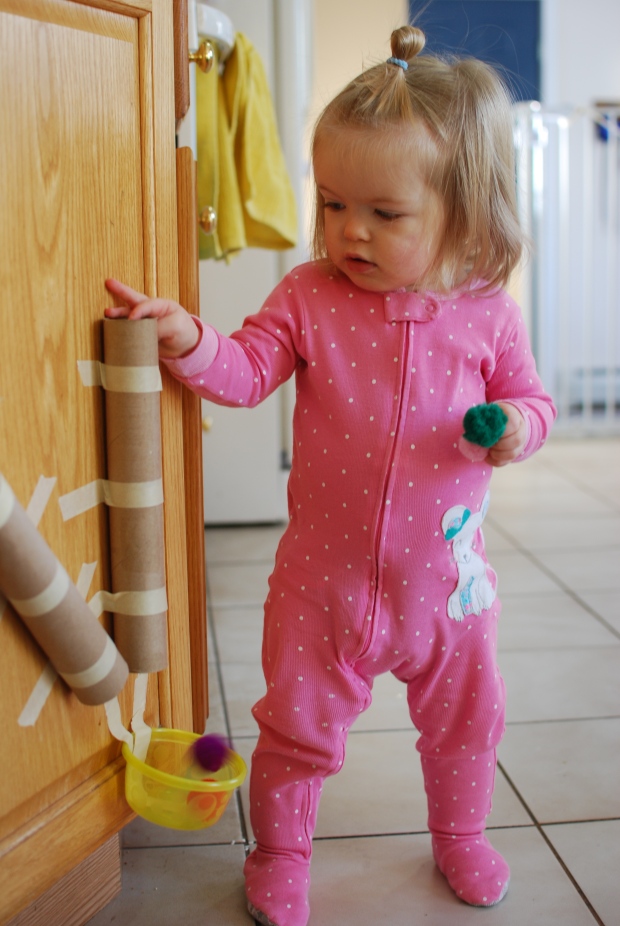 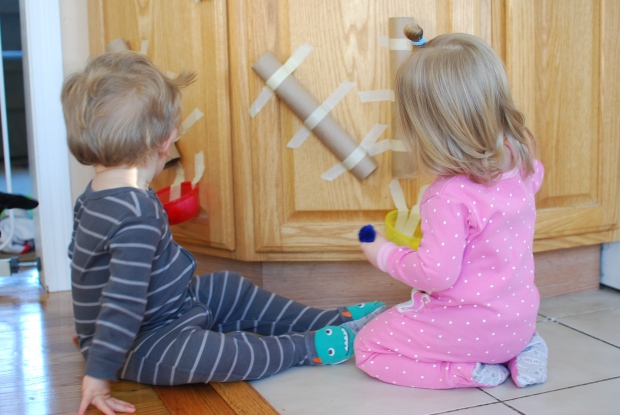 Speaking of pom-poms, I can’t say enough about all the things you can do with them! They come in all sizes, which is nice. For the most part, I limit my twins to the medium and large sized pom-poms as they still put a lot in their mouths. But really, the possibilities are endless. 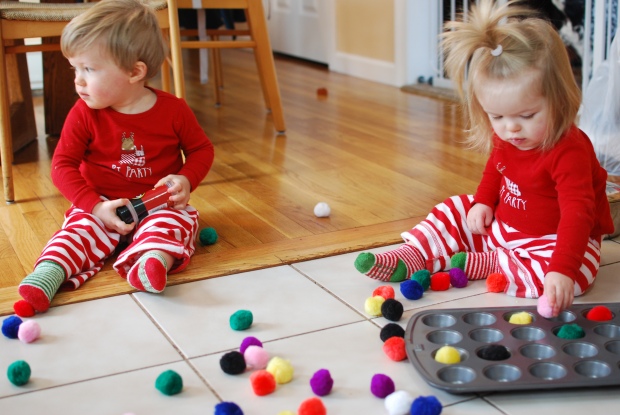 The morning was really nice. Not relaxing, but then I doubt I’ll have another relaxing day for quite a while. After the nap (which was only an hour), I felt myself running out of steam. We played a lot with our toys and then the bickering started. Time to venture out of the house! The day capped off with two meltdowns at dinner (one from each, and not at the same time), and a giant poop in the tub. There’s nothing like evacuating a tub full of poop with two toddlers in it. All in all though, a successful snow day! Back to work tomorrow…